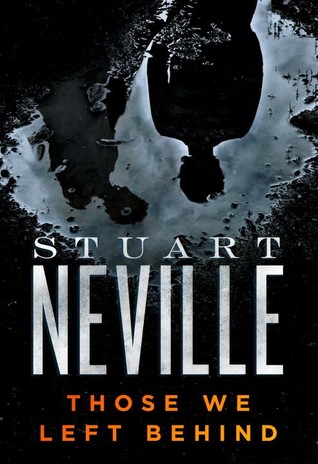 Those We Left Behind

Several chapters will roll by in Stuart Neville’s chilling novel, Those We Left Behind, before you find out why everyone fears the Devine brothers. Until that point, all we know is that Ciaran Devine has just gotten out of a juvenile detention facility and been placed in a hostel for other juvenile offenders. He is terrified out of the outside world and all he wants is to reconnect with his older brother, Thomas. Thomas is a hard young man. It isn’t long before questions arise about which brother is the real criminal. Those We Left Behind is narrated by Ciaran’s probation officer, Paula Cunningham, and Serena Flanagan, the detective who tried to get Ciaran to tell her what happened the night the brothers’ foster father was murdered by one of them.

Paula has been warned about the Devine brothers. Ciaran, however, doesn’t match up with the descriptions and warnings. He’s extremely quiet. He’s not threatening. In fact, he reads to me like someone on the autism spectrum. Thomas has been his brother’s minder—and master—since their parents’ deaths. The brothers are extremely co-dependent. Still, Paula does what she can for Ciaran. She helps him get a job with a landscaper. She also pushes him to see himself as a separate person from his brother.

Serena made a connection with Ciaran during the first interviews the brothers had after they were found covered in their foster father’s blood. Because Thomas is overtly violent, Serena worked on Ciaran, to try and get the real story out of him. Ciaran stubbornly refused to recant his confession to the murder. Now, five years later, Serena sees Ciaran’s release as another attempt to crack through the brothers’ bond—if only she can keep Thomas and Ciaran apart.

Those We Left Behind is not a whodunnit mystery, per se; it’s more of a whydunnit. As the novel progresses, the characters and the plot force readers to ask questions about why Ciaran and Thomas are the way they are and just how much guilt they should bear for their crimes. Paula and Serena have to come to terms with the fact that the brothers (at least one of them, anyway) are not innocent, misguided boys.

Because Those We Left Behind is a whydunnit, it is also a story of the possibility of atonement. These kinds of stories are much more interesting to me that mysteries and thrillers in which the criminal is punished by the state. The older I get, the more I think that incarceration is a only a half measure. It helps keep the rest of us safe when criminals are locked up, but unless there is a real change, prison is a delaying tactic. It clearly was in Those We Left Behind. Real justice requires something more than just being punished for committing a crime. It requires a genuine realization of the damage done to the criminal’s victims. It also requires that the criminal find a way to rebalance Justice’s metaphorical scales.

I received a free copy of this ebook from NetGalley, in exchange for an honest review. It will be released 22 September 2015.