There are some people who you never want to ask where they are from unless you’re ready to sit down with them for hours, possibly over a coffee or tea, and listen to them spin out stories about not only where they come from, but also when and who they come from. Since I love a hot beverage and a story-spinner, I was happy to sit down (metaphorically) with Saša Stanišić as he tried to explain where/who/when he comes from in Where You Come From (expertly translated by Damion Searls).

Speaking strictly geographically, Saša Stanišić and his family are from Višegrad, in what is now the Republika Srpska (Bosnia and Herzegovina). Speaking temporally, the Stanišićs are from Yugoslavia. When civil and ethnic violence broke out when the country started to splinter in 1991, they fled to Germany. Speaking genealogically (I guess?), Stanišić comes from a sprawling family who live in Višegrad and the remote village of Oskoruša. A web of family stories and memories link them together: grandfathers who rafted the Drina, a great aunt who wanted to go into space, a grandmother who always called Stanišić a donkey. But Stanišić is also a refugee boy who grew into a man among many other refugees in Heidelburg. Where he lived, no one was from ’round here. All of this has given Stanišić a very reflective attitude and a semi-permanent sense of being an outsider.

It’s perhaps no surprise that Stanišić doesn’t tell his story in a straight line. He constantly jumps back and forth through time to give a complete answer to the question of where he comes from. This means we visit Yugoslavia in its last decade, a more peaceful Bosnia/Republika Srpska in the 2010s, with Germany in between. Perhaps the one constant in this work is Stanišić’s grandmother, Kristina, who was his link to the past even through her heart-breaking decline into dementia. So many things remind Stanišić of visiting his grandmother in Višegrad and Oskoruša. The more time I spent with this book, the more I started to see why. His grandmother, who weathered the horrific violence of the civil war, was a rock. Even after she started to show the signs of dementia, Kristina was stubborn about staying the same and living independently. She is also someone who appreciates a good story or a trip down memory lane.

Where You Come From is a strange ride, but one I grew to enjoy once I settled in with the Stanišić clan and the author’s penchant for time-traveling through his own life. Readers who like a non-linear autofictional narrative will enjoy this personal and family history.

Trigger warning for discussion of rape.

Kim Echlin creates a protagonist who can navigate, in fiction, real events during and after the Yugoslav Wars in Speak, Silence. An old love of travel journalist Gota Dobson connects her to a group of remarkable women who are trying to get justice for the women of Foča, located in a still disputed part of Bosnia and Herzegovina. The women of Foča were kidnapped and subjected to repeated rape and torture during the war. Now, years later, some of these women will testify against the man who ordered their victimization as part of the International Criminal Tribunal for the Former Yugoslavia.

Gota, at first, struck me as an odd choice as a narrator for this book. Why not one of the women who is testifying? Or one of their lawyers? Or someone closer to the crimes being adjudicated in the tribunal? Gota is Canadian. She is only sort of connected to the tribunal because she fell in love with a Bosnian man—who is in love with one of the lead witnesses. Gota’s desire to be close to Kosmos brings her into Edina’s orbit, just as she and her lawyer are deciding who will (and who can) testify at the tribunal. It wasn’t until I got near the end of the book that I figured out a reason for having someone only tangentially connected to the Yugoslav Wars be the narrator. Gota is an every-woman who also has a talent for eloquently writing about her observations. Being an every-women means that we can easily put ourselves in Gota’s shoes, as she witnesses to the witnesses at the tribunals.

Speak, Silence is a hard book to read but, I think, an important one—especially in a time where #MeToo is still working towards justice for women who’ve experienced sexual harassment and assault. We live in a world where rape is very rarely punished, especially when it’s been weaponized during war. Women (and men) who have been raped are too often left to stay silent to avoid social shame, who’ve been told that being raped might be their fault, and who might have to see the people who brutalized them walking around unpunished. Not only does Speak, Silence ask us to confront all of this, it also leaves us with the question of what justice even looks like. Even if the women win their case and the defendant is convicted, how can there be reparations?

There are some stories we tell over and over because people always think that, this time, it will go differently. A Castle in Romagna, by Igor Štiks (translated by Tomislav Kuzmanović and Russell Scott Valentino), features two such tales. In the present, a friar at Mardi Castle tells a Bosnian tourist the story of Enzo Strecci and his own story of grand-passion-gone-wrong in post-war Yugoslavia.

The unnamed Bosnia tourist has come to Mardi Castle because he is a fan of the work of a sixteenth century Italian poet, Enzo Strecci, who was executed for falling in love with the wrong woman. After an awkward encounter with a friar who leads tours, the tourist is promised a more detailed story about Strecci. The friar then adds his own, eerily similar story of love and exile.

It’s impossible not to see the parallels between the two. I think the only reason the friar lived to tell his stories is a matter of luck and the fact that he happened to know one decent person in his village. The similarities and the spare way Štiks writes make the narratives almost like fairy tales, archetypes that keep inescapably popping up. The sense of inevitability in both tales made me want to shout into the book at the friar and Enzo to warn them that they’re being idiots.

A Castle in Romagna dials up every emotion to eleven. If you are not a fan of grand passions, this is not the book for you. If you do like watching characters falling in love with the wrong people and throwing all caution to the wind, pick this one up. Based on my post last week and my tone in this post, you can probably tell which camp I’m in. This isn’t the fault of A Castle in Romagna. This is a very well written book. I’m just too pragmatic personally for grand passions. 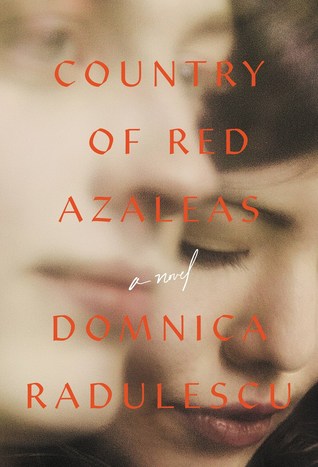 There’s an old game I’ve heard people play (and have played myself) about what might be a worse thing to happen. Players imagine the worst thing that could happen and are challenged by other players trying to come up with something worse. The challenge is followed by a long discussion about which is worse and why. Domnica Radulescu’s novel, Country of Red Azaleas, is not quite a game of what’s worse, but it strongly reminded me of one. The two protagonists of the novel, Lara and Marija, both have tough lives. One lives through war and rape. The other has more existential, less tangible problems. They can’t help comparing their lives and offering sympathy—not to see which of them had it worse, but because they are very empathetic women.

Lara and Marija were the closest of girlhood friends, bonded to each other like sisters. In college, in the early 1990s, Lara met and fell in love with an American. She married him and left for America just as civil war broke out in the former Yugoslav republics. Marija stayed behind with her family in Sarajevo. They lose touch shortly before the Srebrenica Massacre in 1995. Marija survives, but is deeply wounded, physically and emotionally. The two characters do not reconnect until years later, in Los Angeles of all places.

While Marija survives Bosnia, Lara feels lost in Washington, D.C. She believes she should feel lucky for getting out, grateful to her connected American husband. Compared with Marija’s life, what does Lara have to complain about? Anyone who isn’t privy to Lara’s dissatisfaction and lack of passion for her husband and bewilderment about her place in America would probably echo Lara’s family and friends in their insistence that she has a good life. Even Lara herself can’t quite point to what makes her unhappy, except to say that she doesn’t understand her mercurial but boring husband.

The novel picks up steam at the end, when Lara and Marija find each other. After long passages of suburban ennui and an acrimonious divorce, the last part of Country of Red Azaleas feels out of place. Marija has a quest to reclaim the son she left behind in Sarajevo and drags Lara into it. Having her lost friend back gives Lara a stronger sense of self than she’s had in a long time. I started to see the two of them as the kind of people who are incomplete without another self to love and support.

Country of Red Azaleas reads like Lara’s autobiography. Not only is she our primary narrator, she tells her story looking back from some point in the future. There are few “scenes,” as such and little dialog. Lara just tells us what happen, with little tension about how things will come out. It took some getting used to and I’m not sure I even like the style. The ending is rather muddled, too. But Country of Red Azaleas is going to stick with me for a while as I puzzle it through.

I received a free copy of this book from NetGalley for review consideration. It will be released 5 April 2016.