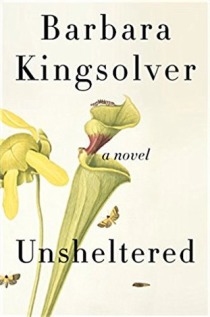 The more historical fiction I read—especially when it’s paired with a contemporary narrative, like a strong underline—the more I realize that society is always in crisis. The old guard hold on fiercely to what they believe is the right way of doing things. Their children may buck the system a little, but they were raised to see the world the way their parents do. The grandchildren, at least as presented in Barbara Kingsolver’s wrenching novel Unsheltered, offer a bit of hope that we might learn from the mistakes of the past and live better than their forbearers.

In the present (plus or minus a few years), Willa is approaching the end of her rope. The house she and her family have inherited in Vineland, New Jersey, she is informed, will soon start to collapse around them. Her husband, having lost his well-paid position at a closed university, scrapes by as an adjunct. Her son just lost his partner to suicide a short time after the birth of their son. Her father-in-law is dying of chronic obstructive pulmonary disease. Her daughter, Tig, has mysteriously returned from Cuba, carrying an emotional burden she won’t talk about. Perhaps worst of all, Willa seems to be the only one who can see that the family is hovering at the edge of penury.

In the 1870s, Thatcher Greenwood has just taken up a position as science teacher at a school in the Landis Township (now Vineland). He, his wife, sister-in-law, and mother-in-law have moved into a house owned by the mother-in-law, a house that is suffering structural integrity problems similar to the ones Willa’s house has. Thatcher also has similar problems with money. (Teachers don’t make enough money in any century.) But what angers him the most is the way that the principal of the school refuses to let Thatcher teach anything that might challenge a fundamentalist Christian view of the world. No chemistry experiments or microscopes. Certainly no Darwin. Not even a field trip to the nearby Pine Barrens.

Unsheltered is both a slow burn of a book and a pointed examination of the logical dead ends American society keeps hitting. Reading about Willa and Thatcher’s months in Vineland/Landis Township felt like I became an invisible member of the families. I witnessed little moments of tenderness and love as well as bitter arguments about the right way of things. Both Willa and Thatcher are peacemakers. They keep calm and carry on as much as possible. After all, they believe that they are the ones keeping the families together and sheltered. It takes an other character to make them realize how much they themselves have contributed to their untenable positions. In the end, both Willa and Thatcher are asked if it’s worth it to keep working towards their original goals of big house, keeping up appearances, and working with the system—or if it’s time to break ties and start over with a new plan.

Unsheltered fits with Kingsolver’s other novels, though it has less to do with nature than Flight Behavior or Prodigal Summer. This book once again shows us the ways we can tangle ourselves up in when we have to juggle the expectations of others with one’s own desires or curiosity. Even though it takes a while to get off the ground and contains blatant references to American politics around 2016 that could get dated, Unsheltered offers so many questions to think about that desperately needed to be asked. I think this book would be terrific for book groups, as well as for readers who look around and wonder if there’s a better way to live. After all, the materially comfortable and politically apathetic (or impotently furious) way we live now can’t last forever.

I received a free copy of this book from the publisher via Edelweiss, for review consideration. It will be released 16 October 2016.

Notes for bibliotherapeutic use: Recommend to readers who feel stuck and those who feel depressed when they turn on the news.