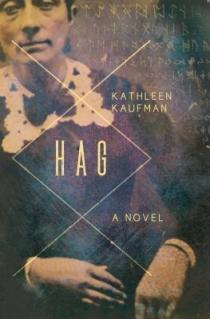 The women in Alice Grace Kyles’ family have always been considered odd. They have special talents: with healing, seeing the future, etc. The locals wherever they happen to live call them witches. We readers don’t have to wait long for the answer for all this to be revealed in Kathleen Kaufman’s Hag. All of the women, including Alice herself, are descended from the Cailleach, a powerful female creature sometimes called a hag.

In the short passages preceding each chapter about Alice, we learn a little bit more about the Cailleach. She is an ancient supernatural being who takes occasional mates and births daughters, who are then sent out into the world to lead “extraordinary lives.” The only problem is that once they leave their mother, these daughters forget what they’ve learned and what they’re capable. These short passages follow the line down to Alice, as each gets further and further away from their ancestry. Over and over, we’re told that the Cailleach’s time is coming—but it isn’t until the very end that we finally learn what this means.

The rune Ingwaz features prominently in this book (Image via Pinterest)

In the longer chapters, we follow Alice from Glasgow to Colorado to Venezuela and back to Glasgow as she tries to figure out what she should do with her life. Alice is, because of time and her mother’s choice to take them to Colorado, the most cut off from her heritage. She has powers that manifest when she’s upset, but she does her best to keep a lid on these. She does her best to live normally to avoid accusations of witchcraft. Living normally is much easier than following the unconventional paths her ancestress’s followed. Apart from returning home to Glasgow and having a preternaturally knowledgable child, Alice doesn’t do much to reclaim her heritage. When the ending comes, the climax of her story reads more like an accident than a purposeful conclusion to a family saga.

Hag jumps from episode to episode in Alice’s life, so much so that it feels like it’s racing along. It’s only at the end of the book that the plot starts to resemble a conventional novel with a single arc. To be honest, I’m not sure what to make of the structure of this novel. There are parts where I was hooked. The parts about Alice’s great-grandmother, great-great-grandmother, and great-great-great grandmother were fascinating. Unfortunately, the time jumps and the mystery about what Alice is supposed to do with her life and what it means for the Cailleach that her time is coming made the book feel scattered and undeveloped. I wished there had been more of something in Hag make me feel more engaged in Alice’s story and that of her frankly creepy child.

I received a free copy of this book from the publisher via Edelweiss, for review consideration. It will be released 2 October 2018.