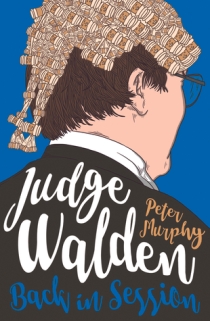 To paraphrase Oliver Wilde, the law is rarely pure and never simple. This is certainly true of the stories in Peter Murphy’s Judge Walden: Back in Session, his second collection of stories to feature the conscientious and thoroughly decent Bermondsey judge. In each story, we see Judge Walden wrestle with tricky points of law and do battle with the civil servants who constantly look for ways to cut costs to get “value for money for the taxpayers.” Best of all, these stories have a gentle humor to them that I think would make a brilliant BBC series.

A couple of favorites from this collection include:

“Arthur Swivell Sings Cole Porter.” The case before the bench in this story involves a market stall seller of vintage goods who is accused of selling bootleg records. The accused maintains that the records are authentic recordings by a local jazz band. The Crown contends that they’re a bad rip off of an American jazz group. There’s a reason why plagiarism and copyright cases are all decided on an individual basis, both in the United States and in Britain. They’re fiendishly complicated and sometimes comes down to the smallest details. The comic turns the case takes reminds me a bit of an actual court case from the US, where musician and songwriter John Fogerty played his songs back to back in the witness stand to convince a jury that he didn’t plagiarize himself.

“Mortifying the Flesh.” This story is a little less light hearted than the others in the collection because of the nature of the case. It is the kind of case that the newspapers drool over. A vicar has been accused of using church funds to pay for his sessions with a dominatrix. His defense is that the sessions are a form of devotion, because he’s having someone flagellate him. Even though it’s not as amusing as the other stories, I really liked the tricky points of law that Walden has to think his way though. There are laws that can guide him, but they’re out of date and/or too blunt to use in this particular case. We tend to forget that the courts are where laws are put to the test, to see if they really work and can deliver justice in a nuanced world.

The stories are longer than the usual length expected; they might almost qualify as novelettes (if I knew were the cut off was). Because they’re longer, we get treated to more development of plot and character than we usually get in short stories. In fact, the stories contain enough content, I think, to support a limited run series. There are several scenes that I would love to see performed, especially the ending of “Arthur Swivell Sings Cole Porter.”

I loved the legal issues, the skirmishes with the civil servants, and the humor that threads through these stories. I enjoyed this book so much that I want to go back and read the first collection of Judge Walden stories.

I received a free copy of this book from the publisher via NetGalley, for review consideration. It will be released 1 October 2018.