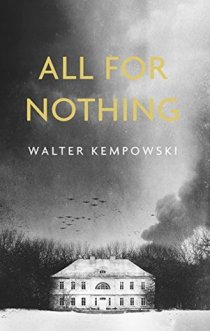 There are two paired questions I hear all the time from students studying World War II. The first is, how much did ordinary Germans know about the Holocaust and the atrocities committed by the Nazis. The second is, how could they not know what was happening? In Walter Kempowski’s All for Nothing (translated by Anthea Bell), we see a small family of aristocratic Germans who are so clueless about what was happening outside of themselves that I wanted to scream at them. This disturbing novel follows the von Globigs and a handful of their acquaintances over the course of a few weeks in January 1945. They’ve been isolated from the truth of the war up to this point, but the war is heading straight towards their little piece of East Prussia and they will no longer have the luxury of sitting to one side.

Last fall, I read Ivan’s War, by Catherine Merridale, so I had a very good idea of what was going to happen to any German who got caught by the Red Army. I can’t entirely fault the von Globig family for not knowing; the Red Army was still in their future. But I can fault them for their self-absorption. Katherina von Globig is a society lady who has deliberately isolated herself in her rooms of the family manor, Georgenhof, after the death of their daughter two years previously. Grief is hard, especially for a parent, but Katherina still has a living son, Peter, to keep an eye out for. Auntie, Katherina’s relative-in-law, who lost her family’s estate in Silesia in the 1920s and who lived through World War I should know better than to shut out the world. The Polish and Ukrainian “servants” should definitely know better. And yet, the family carries on with their own amusements. Katherina reminisces about the movies she’s seen and her affair with the local mayor. Peter plays with his trains. Auntie keeps an eye on the family goods so that no one steals anything. None of them has an eye on the horizon, even though Katherina occasionally tunes into the BBC.

Meanwhile, Drygalski keeps butting into their business as the local housing manager. The little martinet wants to use the large house to billet refugees and, any way he can, stick it to the aristocrats who’ve always looked down on them. Peter’s tutor, Dr. Wagner, carries on teaching the boy Latin. A parade of refugees—the higher in rank, the more self-absorbed and out of touch with their rapidly changing reality—comes through Georgenhof. Only a few characters have healthy senses of self-preservation. Most of them are fixated on what they’ve lost, their family heirlooms, their instruments, etc.

It’s only towards the end of All for Nothing that the characters get swept up in the cresting wave of refugees from the east. I don’t want to give away the characters’ fates, but I can say that bad luck strikes the family and their acquaintances with an almost divine sense of retribution. There are moments of kindness and mercy, as well as moments of opportunistic cruelty and murderous chaos. With blind luck in the mix, it’s a wonder anyone makes it out of this novel alive.

Kempowski’s novel—through Bell’s lucid translation—has the feeling of folklore throughout. There are few details about the characters given, except for easy to recall facts that stand in for development. This isn’t a bad thing. Rather, I see All for Nothing as a fable that serves to teach us lessons about the impossibility of staying neutral when others commit terrible crimes in one’s name. So, we drift along with the characters as their fortunes change from moment to moment. We have to experience along with them their good and bad luck. There is backstory of some of the characters, but nothing to distract us from what is happening during those cold weeks in January 1945 with the Red Army coming as fast as it can to snatch them all up. All for Nothing is extraordinarily effecting in answering at least one of the questions we always ask about the Germans on their home front.