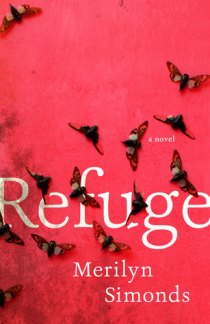 Cass MacCallum has had a life of ups and downs. At ninety-six, she has more or less made peace with it. She lives in her little house on her little Ontario island, waiting for her body to finally give out with age. But then someone from Myanmar starts to send her emails, claiming to be the granddaughter of Cass’s long lost son. At the beginning of Refuge, by Merilyn Simonds, Nang Aung Myaing shows up at Cass’s house with a request for help with her claim for asylum.

Cass was always her father’s favorite and, unfortunately, loathed by her older sister, May. When their father dies and May makes it impossible for her to stay on the farm, Cass takes her newly minted nursing degree and goes to Mexico City. Through a few lucky coincidences and with the generosity of the people she meets, Cass builds a fuller, more interesting and useful life. (I’ll admit that I raised my eyebrows when Cass met and nursed Frieda Kahlo.) The vivacity of Cass’s life in Mexico is a bright contrast to the cold, grating existence in Canada, with a sister who will not forgive her for anything.

While we learn more about Cass’s life in Mexico, we also see her stubbornly refusing to believe Nang Aung Myaing’s story about her heritage. At first, I didn’t understand Cass when there was compelling evidence to believe the new arrival. It’s only as Cass unspools her story that I saw what she had once had and what she’d had to let go that I realized what it might cost Cass to accept that she might still have living family. She loved her son and her son’s father so much, that one would think having something of them back would be a boon. By the same token, however, accepting Nang Aung Myaing means that she can’t avoid dredging up her grief over their loss.

While Refuge begins with a woman winding down her life, it ends with a reclamation of what life she still has left. Nang Aung Myaing brings back some of the brightness and urgency Cass felt when she lived in Mexico, or when her lover or her son were still alive. This book is full of life and the struggle to stay alive, which I always find profoundly moving. Even with the bits I didn’t quite believe (Frieda Kahlo!), I really enjoyed Refuge.

I received a free copy of this book from the publisher via NetGalley, for review consideration. It will be released 4 September 2018.