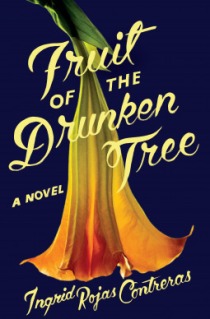 There is a strong theme of individuality and individual responsibility in Western literature. We are shown, over and over, that we can be the heroes of our own stories. But in Fruit of the Drunken Tree, by Ingrid Rojas Contreras, it seems like none of the characters have free will. They are constantly at the mercy of others. This isn’t so surprising, given that the story is set in the late 1980s and early 1990s in Bogatá, Columbia—Pablo Escobar‘s last years of freedom and a time when multiple armed groups violently fought for control. Chula and Petrona, the protagonists of this affecting, tense novel, don’t have a lot of choice. Yet, they still struggle against their circumstances to stay alive and keep their loved ones safe.

Chula Santiago is the narrator for most of Fruit of the Drunken Tree. She tells her story from the safety of Los Angeles, years after the events of the novel. But her perspective so so visceral that I completely forgot that she would survive what happens. She looks back that the years after she turned nine, when a new maid named Petrona arrived and the family’s insulated bubble burst. Chula and her sister are spoiled and wild. They’ve grown up mostly under the careless supervision of their mother, while their father works for an American oil company and only visits every now and then. The girls play annoying pranks on their neighbors, try to find the Spirits of Purgatory to ask for supernatural favors, and generally try to keep themselves entertained while the larger armed conflicts rage around them.

Petrona has fewer opportunities than Chula. She lives in a slum. Her father and older brothers are dead. She is the oldest child still left with her mother and younger sisters. While she tries to follow her father’s ethically upright behavior, it’s not not enough (especially for a teenage girl) to work an honest job. But when she gets pulled into her boyfriend’s criminal activities, she’s suddenly in over her head. Her connections to the Santiago family make her a valuable contact for the boyfriend’s group of whatever they are. It’s hard to tell the difference between a gang, guerillas, and paramilitary fighters. Not that it really matters who they are. They’re more than willing to carry out their threats to get what they want.

Before long, Chula is trapped by panic attacks, depression, and anger while Petrona is caught by more physical dangers. Their circumstances seem to have taken all their choices away, much like the drunken tree that grows in the Santiagos’ front garden is rumored to take away people’s free will if they even breathe the scent from the flowers. The only way out for Chula and Petrona is through—if they can manage to live that long. Fruit of the Drunken Tree is written in compelling language that brought late 1980s/early 1990s Bogatá back to life, complete with devastating bombings, assassinations, glass at the top of walls around houses, and the strong feeling of desperate fear.

I received a free copy of this book from the publisher via NetGalley, for review consideration. It will be released 31 July 2018.