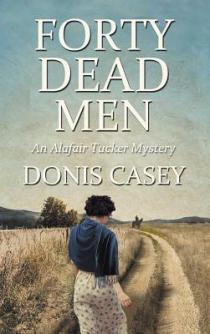 George Tucker doesn’t know what he wants when he returns to the family farm in Boynton, Oklahoma after serving in World War I. He has blackouts and is hiding from memories of things that happened in France. George, known as Gee Dub by his family, retreats to a quiet wood every day to get some quiet and avoid his mother’s insightful questions. One day, he sees an exhausted woman walking in the rain. His protective instincts take over and land him in a world of trouble. Fortunately, his mother, Alafair, has experience investigating crimes. Forty Dead Men, by Donis Casey, is the tenth book in the series.

Forty Dead Mean is leisurely about setting up its mystery. It’s hard to be sure what’s relevant and what’s a red herring—which is something I very much enjoy. Sorting clues from dross adds verisimilitude to mysteries, I think, because a genuine investigation is going to kick up all kinds of interesting information about the people involved with a crime. And this case is certainly interesting. By the time the main crime actually happens, we have a soldier dead from Spanish Flu, bigamy, and mistaken identities.

The characters in Forty Dead Men are my favorite part of the novel. Even though this is the tenth book in the series and I haven’t read any of them, the characters are fully realized. I felt for Gee Dub, who is clearly a good man but who doesn’t consider the possible consequences of his actions. He struggles with post-traumatic stress and a brain injury. I also felt for Holly Thornberry, the woman who was walking in the rain. She is he unfortunate victim of an unscrupulous man. She is even less considerate of consequences than Gee Dub, which makes them an entertaining pair to watch. Gee Dub was always there to rescue her when she did something dramatically foolish. Alafair, however, is the beating heart of this book. (I expect she is in every series entry.) She is sharp and deeply caring. She’ll do anything to protect her kin. When Gee Dub gets in trouble, she mobilizes her vast family to help him. No one can resist her—at least, not for long.

I enjoyed Forty Dead Men a lot. More than I expected, to be honest. When I first learned that the primary detective was an Oklahoma grandmother, I was dubious. I requested this book from Edelweiss because of the soldier-with-PTSD element. The more I read, the more I liked Forty Dead Men. The mystery (which I have tried not to spoil in anyway in this review) is wonderfully constructed. It kept me guessing right to the end. And that ending! It was….I’m afraid any adjective I use will give things away. Let’s just say that I thought the ending was terrific.

I received a free copy of this book from the publisher via Edelweiss, for review consideration. It will be released 6 February 2018.