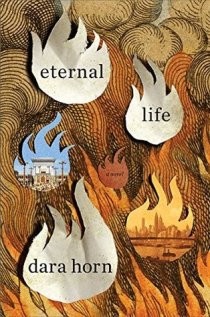 What is a human life worth? For a mother like Rachel, the protagonist of Dara Horn’s Eternal Life, the life of her son is worth everything she can give. But, in her rush to save her son, Rachel neglects to read the fine print when she gives up her death so that her son will survive a terrible illness. Ever since that day two thousand years ago, Rachel has been wandering the earth raising family after family, wondering if it was really worth it.

The first hints that not all is right with Rachel come when she refers to her very many sons and daughters, more than a woman could ever have in one lifetime. Then there are all the languages she knows and occupations she’s held over the centuries. Above all else, there’s her deep fatigue and questions about what she’s really living for. For Rachel, death would be a chance to rest once and for all.

We meet Rachel as she’s coming to the realization that the time has come for her to do her disappearing act. As far as her children and grandchildren are aware, she’s in her eighties. She looks decades younger though, and the fact that she’s not about to shuffle off her mortal coil any time soon is about to become awkward. In the past, it was easier to start over somewhere else. Now it requires so much documentation to set up a life that it’s almost impossible to help. The only other person with Rachel’s predicament, Elazar, offers to help, but she still hasn’t forgiven him for the time Elazar got her first husband killed.

Eternal Life moves back and forth between the present and Rachel and Elazar’s first life in Jerusalem a few decades before the destruction of the Second Temple. Horn has a gift for bringing that time and place back to life, though that is partially due to Rachel’s vibrance as a character. I honestly wish this book had been longer, because not only does it only touch on Jewish history, but it also asks interesting questions about whether there should be limits to what parents do for their children. Rachel might make the same choice again, but is it worth creating and leaving family after family to save the life of one mortal child? Thankfully, we learn Rachel’s answer in the end…but you’ll have to read the book yourself to find out what it is because I’m not going to give it away here.

I received a free copy of this book from the publisher via NetGalley, for review consideration. It will be released 23 January 2018.