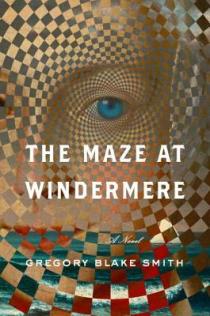 Shakespeare said it first: “The course of true love never did run smooth.” This is certainly true in Gregory Blake Smith’s The Maze at Windermere. In fact, the course of love (or something sinister masquerading as love) runs in such crooked paths that at first it’s hard to tell if the characters are even on the same one. This novel is more like a series of linked stories that share a setting (Newport, Rhode Island) and themes of unrequited love, deceit, dependence, dissociation, and observation. As the narratives draw to their finales, coincidences and motifs pile up to highlight the similarities and differences in the choices the characters make in their attempts to get love or something like it.

The first chapters of The Maze at Windermere almost made me give up. The first character we meet is a tennis pro in the resort town of Newport who finds himself somewhat dependent on the indulgence of a very wealthy family. (I don’t know why I’m so turned off by tennis pros, but I’m going to just chalk it up as a personal eccentricity.) When Henry James showed up, I was very tempted to give up on the book altogether. I loathe Henry James because the one time I tried to read one of his books, The Turn of the Screw, I found the prose impenetrably dense and I hate it when someone makes me feel like an idiot.

I think it was the lure of the puzzle that kept me going. I wasn’t going to let the ghost of Henry James hold me back. So I kept reading. I met characters who didn’t quite know what they wanted until it was snatched away from them or who thought they knew what they wanted until something sent them haring down left turns. Over and over, I saw characters wrestle with what it was they wanted from life, whether it was love, security, or knowledge of others. Only one of the narratives, the one set in 1692, is fairly straightforward and the other narrative circle around it as if to show us all the ways things can go wrong when one refuses to be honest.

There’s a lot to unpack, as we English majors say, in The Maze at Windermere. I’m sure I didn’t understand everything lurking under the surface of these connected stories—mostly because everything I know about Henry James and his work comes from Wikipedia. In particular, the moments in which several of the characters have mystical experiences (a nod to the work of James’ brother, William) require a lot more thought, since I was too busy trying to spot all the links between characters and plots.

The Maze at Windermere is definitely not a light read, so I would only recommend it to readers looking for a challenge. It’s very clever, requires patience, and ready access to the internet if, like me, you feel the temptation to run down hunches and look up names. I’ve never read anything like this book. It tackles topics—unrequited love and dissociation in particular—that I can’t recall ever seeing explored in depth in fiction. Those who take up the challenge will be amply rewarded. I feel quite a lot smarter now because I’m pretty sure I understood part of what the book contained.

I received a free copy of this book from the publisher via NetGalley for review consideration. It will be released 9 January 2018.