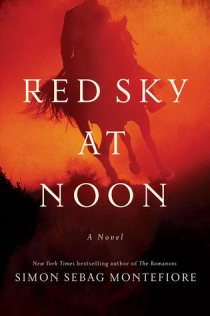 It’s a shame that this book is the conclusion to Simon Sebag Montefiore’s Russian trilogy. Red Sky at Noon, while it has an interesting premise, is laden with a ludicrous romance plot and ahistorical scenes featuring Josef Stalin and Svetlana Stalina that made it hard for me to take the book seriously. I was so excited about this book since I’m a sucker for books about the Red Army during World War II and novels set in Russia before the end of the world in general. If this book had left out the subplots and focused on its protagonist, Benya Golden, I think it would have been an excellent read. Instead, it’s a melodramatic mess.

Benya Golden, like many people sent to the gulag during the purges of the 1930s, has only one option to rejoin Soviet society. He must volunteer for a prisoner battalion. As a shtrafniki, Benya has to serve in whatever function the Red Army gives him and survive being wounded. Only then will he “redeem” himself. Benya is fortunate in that he’s not just sent to the infantry. Instead, he’s turned into a cavalryman, trained by Don Cossack prisoners and a purged general. After receiving more training than many of the Red Army’s draftees and volunteers, Benya is sent to Ukraine in the days before the Battle of Stalingrad. He has a greater chance of dying, given the way the high command threw their men against the Nazis. I lost count of how many times Benya almost got killed.

The chapters with Benya just trying to survive at the best parts of Red Sky at Noon. Unfortunately, the good parts are mixed in with a far-fetched romance plot in which Benya falls in instant love with an Italian nurse who instantly falls in love with him. While armies are raging across Ukraine, they somehow find time to dally. And then, even worse, there are chapters centered on Stalin’s daughter, Svetlana, that I just couldn’t believe. I hate it when fiction creates dialog and scenes for actual historical figures that can’t be supported by actual history.

I was very disappointed by Red Sky at Noon. It tried to do too many things that I just found ridiculous. If you choose to read this, skip the Svetlana sections entirely. The book works just fine without them.

I received a free copy of this book from the publisher via NetGalley for review consideration. It will be released 2 January 2018.