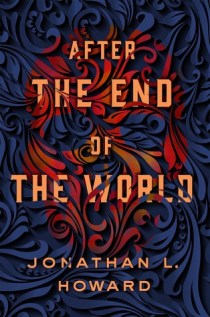 After the universe was “unfolded” at the end of Lovecraft & Carter, Emily Lovecraft and Dan Carter found themselves in a world that was deeply wrong. The prologue of After the End of the World clues us into how wrong the world is as well. The novel opens shortly before the Molotov-Ribbentrop Pact is signed in Moscow, in 1939. Instead of signing, in this reality, a German pilot detonates what appears to be an atomic bomb over the city. Everyone is killed and the Nazis sweep east to conquer the Soviet Union. The prologue sets up a sense of deep unease, one that never really lets up as Lovecraft and Carter try to put the universe back to rights.

Lovecraft is still a book seller and the descendant of H.P. Lovecraft. Carter is still a detective, former policeman, and descendant of Randolph Carter. However, in this new universe, not only did the Nazis win and World War II never happen, but Arkham, Rhode Island, Miskatonic University, and the Necronomicon exist. The intrepid pair don’t have a lot of time to work out just how different their new universe is. Instead, a mysterious and unsettling lawyer gives Carter a job: working for a Gestapo agent on what appears to be a case of scientific malfeasance. The job first pulls Carter deeper into weirdness, then grabs Lovecraft, too.

The plot of After the End of the World begins to pick up speed at the halfway point. Most of what happens before serves to encourage feelings of Lovecraftian weirdness and set the stage for what happens in the second half, when the action relocates to Attu Island, Alaska. It’s rather amazing how Howard manages to pull in so much Nazi occultism while sidestepping some of the worst implications of a successful Third Reich and introducing some new, deeply unpleasant effects.

I wasn’t sure about this book when I first started it. The first half, the stage-setting bit moves a bit too slowly. Like Lovecraft, I was itching for some serious Nazi ass-kicking action. That itch was very satisfyingly scratched in the second half. I was glued to the pages for the entire second half. I still don’t care overmuch for the first half, but I did like the spectacular finish and all the clandestine shenanigans that preceded it.

I received a free copy of this book from the publisher via NetGalley for review consideration. It will be released 14 November 2017.