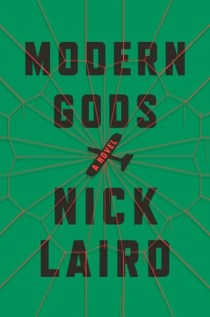 What does religion give us? Most would answer, I think, with comfort, answers to big questions, and so on. In Nick Laird’s Modern Gods, the answer is a lot more cynical. This novel takes a while to approach its thesis, treating us to the domestic dramas of a North Irish family before heading into the wilds of Papua New Guinea to explore an emerging cargo cult. By the end, however, I was left with some profound thoughts about what religion gives its adherents in this life, in addition to its promises about the next.

Northern Ireland and Papua New Guinea might be the furthest places from each other in terms of geography and culture. But in Modern Gods, the two countries are linked by the Donnellys. Liz Donnelly, an anthropologist and former TV presenter, is given a new job presenting on a program for the BBC about the world’s newest religion. After stopping in her hometown in Ulster, she heads off to the island of New Ulster in Papua New Guinea. The novel then splits its time between what Liz is learning about a conflict between a woman who is creating her own religion on the spot and the local Christian missionaries. Meanwhile, her sister, Allison, learns that her new husband Stephen was once an active member of the Ulster Freedom Fighters. (We also learn about Liz’s mother’s cancer and her brother’s affair, which I don’t think add all that much to the narrative.)

By the middle of the book, things start to become clear as Liz’s subject and Stephen start to talk about why they’ve done certain things. We learn that religion, in addition to providing emotional comfort and answers about where we came from and what will happen after we die, also has some tangible benefits in this life. Liz’s subject, Belef, has turned religion into a means of getting back at the Christian missionaries she thinks killed her daughter. Her son, however, has turned to Christianity because being the right-hand man for the missionaries has raised his status to the point where he gets to call the shots around the village instead of the men who would traditionally lead. It was fascinating to see religious people from Northern Ireland and Papua New Guinea reflect on their beliefs in parallel.

I have mixed feelings about this book. On the one hand, I really enjoyed the end of the book where it became clear that religion is a road to power for some people. On the other, it takes Laird a long time to get there—so long I wasn’t sure what Modern Gods was trying to say. Thinking back, I’m not sure if more editing would’ve helped this book reach its target more quickly because I can see why we needed so much of, for example, Stephen’s story to understand how religion gave Northern Irish Catholics and Protestants an almighty okay for their fighting. That said, I still feel that the first half of Modern Gods is front loaded with too much family drama that does nothing for the overall purpose of the narrative.

I received a free copy of this book from Edelweiss for review consideration. It will be released 27 June 2017.