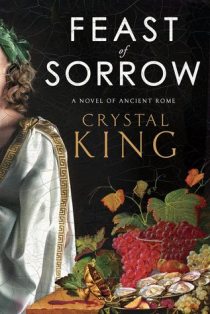 In Feast of Sorrow, Crystal King takes the few known historical details about the life of patrician Marcus Gavius Apicius and the cookbook named after him to create a captivating look into high Roman society in the first century CE. Through the eyes of Thrasius, Apicius’ enslaved cook, we see decades of political wrangling and lots and lots of cooking. Feast of Sorrow is deliciously rich in period detail—though I think I’ll hold off on making some of the provided recipes as I’m not all that fond of dormouse.

The novel opens with the day Apicius—one of the richest men of his time—buys Thrasius. He’s heard that Thrasius is a remarkable cook and Apicius believes that he will rise to fame by advising Caesar on food, wine, and fine dining. Fortunately for Thrasius, the young man is a gifted cook and inventor of recipes. Thrasius is given free reign in the kitchen and any supplies he wishes from across the Empire. The only difficulty is managing Apicious’ mercurial moods. The patrician is desperate for lasting fame, so desperate that he ignores a haruspex‘s prophecy that the harder Apicius’ seeks after fame, the more personal calamity he’ll suffer.

Because Feast of Sorrow follows Apicius’ life, the plot is highly biographical and episodic rather than focused. Some readers might find it meandering. I couldn’t fault the book for that because I was too interested in what Thrasius was cooking up in the kitchen and because Apicius was close enough to Emperor Tiberius‘ circle to get caught up in the machinations of Lucius Aelius Sejanus. The politics alone (more vicious and dangerous than modern politics, if only because of the liberal use of poison) would have been enough to keep me interested. I was hooked enough that I didn’t run to Wikipedia to find out how everything ended before I finished the book.

I was hooked by the food, even if the Romans were willing to eat parts of animals that we don’t even put in hotdogs nowadays. King took her inspiration from the Apicius, the oldest extant cookbook, and did her best to bring it all to life. (King provides a few updated recipes on her site for the bold.) Throughout the book, Thrasius experiments with new ways of not just preparing food but preparing animals for slaughter by feeding them delicacies. Because of Thrasius’ work and creativity, Apicius does rise—though he also becomes notorious for his profligacy with money and his alleged gluttony (as confirmed by Pliny, who appears in a brief cameo).

King’s descriptions of Apicius and Thrasius’ monumental feasts made me wish I could go back in time just for a glimpse. On top of these sumptuous passages, King gives us drama and pathos. If one doesn’t mind a plot that wanders through a historical life, this book is a terrific read.

I received a free copy of this book from Edelweiss for review consideration. It will be released 25 April 2017.