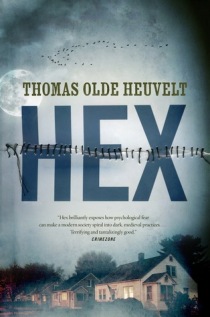 The people of Black Spring, New York are cursed. It’s not really their fault. They were just unlucky enough to be born there or buy a house there. The curse is Katherine van Wyler, a woman accused of being a witch who still haunts Black Spring three hundred plus years later. In Hex, by Thomas Olde Heuvelt and translated by Nancy Forest-Flier, we learn how the Black Spring folk cope with their witch and keep her secret from the world. We also learn how a town can, if pushed down the wrong road hard enough, tear itself apart.

It doesn’t take long to figure out what’s wrong with Black Spring—what takes longer is why it’s all going wrong now. The first chapters are filled with characters dropping bits of history about their town. Katherine van Wyler was executed as a witch and carried on haunting the area as it changed hands from the Dutch to the English. Her whisperings caused people to do terrible things, so a group of clergymen sewed her eyes and mouth shut and wrapped her in iron chains. Still, the people of Black Spring and their military guardians can’t leave her alone. Everyone is terrified of her and fascinated with her.

The plot of Hex starts to take off as Tyler Grant and his friends begin to experiment on Katherine. They figure that if they can work out how Katherine works, they can lift their town’s isolation from the rest of the world. They just have to work out how Katherine’s power keeps them from leaving, then they can get the town to lift it’s Emergency Decree. Unfortunately for Tyler, his friends, and the town, their experiments kick of a series of terrible events that drive the town berserk.

We watch all of this happen from the perspective of Tyler’s father, Steve, and one of the town watchers, Robert Grim. Compared to the obsession and superstition of the other characters, Steve and Robert appear as the lone voices of reason. Watching Black Spring and Katherine through their eyes creates a tense sense of helplessness and dread because none of us—reader or narrators—can do anything about it.

What interested me most about this book is the way the characters and the plot revolve around questions of sacrifice. Early in the book, the Grant boys pester their parents by asking hypothetical questions about who they would save if it really came down to it. This echoes Katherine’s original choice of (maybe) resurrecting her son and revealing herself to be a witch (maybe). Over and over, characters have to face agonizing decisions. And, over and over, characters are left to castigate themselves for those choices.

I’ve been hearing a lot of buzz about Hex since I first heard about it weeks ago from Liberty Hardy at Book Riot. It absolutely lives up to its reputation as a first rate horror novel. I haven’t told all about this book in this review, so readers who are tempted will find all sorts of questions and things to think about after finishing this book.