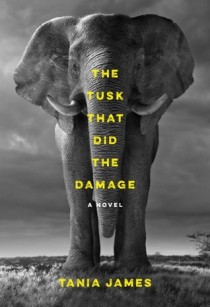 The Tusk that Did the Damage

Though brief, Tania James’s The Tusk that Did the Damage is powerfully affecting. I read it in two sittings because I couldn’t get enough of the characters, the story, and the profound questions the novel asks. The novel begins with the voice of Gravedigger, a notorious elephant in southern India. As he tells his story, we also hear from Manu, the brother of an elephant poacher, and Emma, a documentary filmmaker. Through these three narrators, I explored the conflicts between animals and humans, conservationists and poachers, ethical people and the opportunists. The fact that there are no easy answers in this book help make The Tusk that Did the Damage one of the most brilliant books I’ve read lately.

Gravedigger is an orphaned elephant who was taken from the side of his dead mother (killed for her tail) to work as a ceremonial elephant; he is decorated and transported around southern India to take part in noisy, crowded temple ceremonies. He is variously cared for and abused by his human handles until the day he snaps and starts killing people. He is known as Gravedigger because he covers the bodies of people he killed. (This is, apparently, not uncommon. I knew a bit about elephants and their behavior from two podcasts from Caustic Soda. I recommend listening to these episodes before reading the book.) It’s hard to tell how old Gravedigger is, though it quickly becomes clear that he and the two human narrators are going to collide before the end of the novel.

Manu, the poacher’s brother, is a farmer in Sitamala, a small village near a protected forest. His brother made money killing elephants and selling their ivory until he was caught and served four years in prison. Through Manu’s perspective, we learn of the marginal life of Sitamala’s farmers. Bad weather and bad luck can ruin them. The work requires all the farmers’ strength and time. Getting ahead in life is difficult. It’s little wonder that Manu’s brother turns to poaching to try and get out of the daily, yearly grind. Manu does not sympathize with his brother. He wants to live and let live as much as possible.

Emma, in India with her partner Teddy to make a film about forest rangers who save elephant calves, is the most naive of the three narrators. Being a privileged American, she has little idea of what motivates the people around her. To her credit, she tries, but she mostly ends up bewildered by poachers and by the sometimes unethical behavior of the forest rangers. I felt that Emma’s perspective gave me insight into the possibly Sisyphean struggle of conservation. How many of the those elephant calves would later be killed for their tusks? Would Emma and Teddy’s documentary do anything concrete to help India’s elephants?

Among the many Bible verses that still bother me, years after I turned atheist, is this one from Genesis:

This passage is paraphrased by one of the secondary characters to justify the killing of elephants for their ivory, and I found myself thinking of it often while I read this book. Even though The Tusk that Did the Damage is set in southern India, many of the characters have an adversarial mindset towards the forests and animals they share their patch of earth with. The natural world is either for profit (mining, timber, ivory, bushmeat, etc.) or an enemy (elephants that kill humans). Only a few characters fight the uphill battle against poaching.

The Tusk that Did the Damage is a gloomy book, but I think it’s more effective for all that. Clear victories and happy endings would have felt cheap and unearned. As a reader, I was pleasantly surprised by the gritty twists and turns in the plots. Nothing James did was expected, but it all felt right somehow. I also very much appreciated Gravedigger’s tragic story. Putting a reader inside the head of a character is one of the most powerful ways of generating empathy and empathy for the other creatures we share the planet with is something we badly need. It’s time to stop dominating and subduing the living things that moveth upon the earth before they’re all gone.