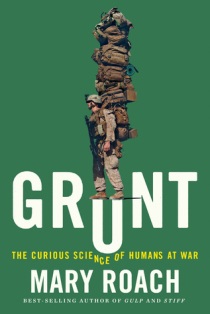 One of my favorite things as a librarian is helping people search for odd topics. These searches frequently turn up bizarre studies that make me wonder how on earth anyone got their grant approved (getting rats addicted to cocaine comes to mind here). If I wasn’t a librarian, I would love to have a job like Mary Roach’s. She has parlayed her curiosity about everything and her delightfully immature sense of humor into a career shedding light on weird science. Her latest book, Grunt: The Curious Science of Humans at War, takes us behind the scenes to show us the men and woman who work to keep our fighting forces healthy, sane, and relatively safe.

In Grunt, Roach interviews entomologists who raise medicinal maggots; surgeons who reconstruct genitalia for soldiers who lost their’s to IEDs; submarine and corpsman instructors; audiologists; and numerous soldiers, sailors, and marines to gather stories and facts. She also combs through military archives to reveal an OSS project to create stink bombs to humiliate the enemy and the World War II quest to develop an effective shark repellent. As usual, Roach leaps from project to experiment to anecdote, following her curiosity wherever it takes her (usually somewhere gross or disturbing). I know some readers don’t like this about her, but I love the idiosyncrasy of Roach’s books because my brain kind of works that way, too.

Even though Roach bounces from topic to topic, I did pick up on a central problem military scientists have faced since the First World War: human behavior. In stressful situations, humans behave counterintuitively. Noise freaks us out. Anti-diarrheal medication interferes with “nature.” We want to hold our breath under water. Again and again, science shows us that our first reflex or semi-logical thoughts are wrong. Several chapters in Grunt illustrate how Marine corpsmen (and women) are trained with everything but live fire exercise to avoid lethal mistakes and how submarine instructors use bags of wine to show why holding one’s breath while surfacing is a really bad idea (explosive decompression).

Training and experience help, but only so much. A large part of military research is devoted to new armor, uniforms, equipment, and medication—more stuff for soldiers to tote around in their already overloaded packs. The longer I read, the more I noticed how everything is a trade off between weight, environmental conditions (heat and humidity), and compliance from the soldiers, sailors, and marines.

Grunt was fascinating and hilarious. I had a great time traveling around from military base to base (and even onboard a ballistic missile submarine) with Roach. She showed me a side to the Armed Forces I hadn’t even thought of before, even though my dad was in the Navy for decades and many of the older male members of my family served in the Army and Air Force.

I received a free copy of this book from NetGalley for review consideration. It will be released 7 June 2016.