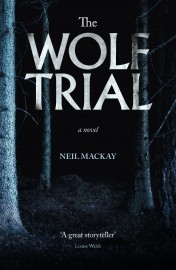 In 1563, Peter Strumpf (also spelled Stumpp) was executed for killing approximately 70 people. This would have been remarkable enough except for one other detail: Strumpf was believed to be a werewolf. How else to explain his prolific and extremely violent crimes? The Wolf Trial, by Neil Mackay, tells the story of Peter Strumpf through the eyes of William Lessinger, who assisted during Strumpf’s trial. The Wolf Trial is a story about when justice has to do battle with revenge in an age when executions could be day-long tortures.

William Lessinger tells us his story decades later, looking back on a case that still haunts him. William (known as Willie) accompanied his professor, Paulus Melchior, when Paulus was summoned to Bideburg to adjudicate the case of the Werewolf of Bideburg. Paulus had a reputation for fairness and thoroughness, though he often thwarted local “justice” when things threatened to get out of hand. Because there might be a supernatural element to the case, Paulus and Willie are also accompanied by Fromme, a Roman Catholic priest.

There is no question the Peter Strumpf is guilty; Strumpf confessed, both under torture and not. The question is whether he should be tried as a man and murderer or if he should be tried and executed as an agent of the devil. Fromme and the people of Bideburg are all for executing Strumpf as a werewolf. Strumpf has terrorized the town for decades. There are even special bells placed around the town that are only to be rung in the event of a wolf attack. Strumpf and his family are also the richest people in Bideburg. If he is found to be in league with the devil, all his goods and properties are forfeit to the town.

Willie shows us the conflict between Paulus and Fromme and the townspeople. Paulus does not believe in the supernatural. Fromme and the townspeople very much do. If they are allowed to break Strumpf (literally, on a wheel), they believe justice will be served and life will be able to go back to normal. Paulus has the upperhand for a while, but there is too much bad feeling for him to retain it for long.

The Wolf Trial centers on the Strumpf case, but Willie often steps back to tell us more about the time and the place. Germany in 1563 was only just starting to recover from years of religious warfare and the Peasants’ War. Paulus Melchior caught the brunt of it as a child, surviving the Münster Rebellion and the subsequent siege. Willie spares us none of the shocking details of the aftermath. It’s no surprise, then, that Paulus does everything he can to keep things secular in Bideburg.

Once events starts to spin out of control and the violence escalates, The Wolf Trial becomes terrifying and sickening. The fact that the novel is based on a real story makes it even worse. I’ve seen woodcuts of executions of the time, but they cannot convey the reality of what angry, frightened people can do to each other. This book is not for readers with delicate stomachs.

I stuck with the book because Mackay, through his narrator, draws amazing portraits of people. Even though I could never do what some of these people do, I felt I could understand their motivations. I’ve also never read a book set in this place and time, so I very much wanted to know more. I spent a lot of time hopping back and forth between the book and Wikipedia to learn more about the names that Willie dropped. Most of all, I was fascinated by the tension between achieving justice and committing revenge. Justice is a high ideal to strive for and our emotions can, if we let them, cause us to fall short. With a case like Strumpf’s, is it even possible to heal a community and give the murderer a sentence that gives his victims’ justice?

I received a free copy of this book from NetGalley for review consideration. It will be released 21 April 2016.