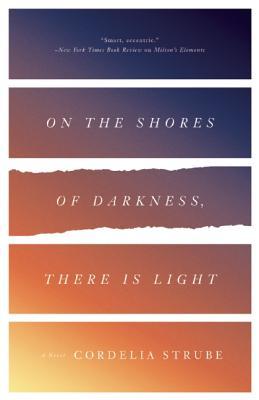 On the Shores of Darkness, There is Light

I started reading Cordelia Strube’s On the Shores of Darkness, There is Light at about nine o’clock on Friday night. The next thing I knew, it was almost one o’clock in the morning. Only the fact that I had to be at work the next morning prevented me from staying up until I had finished it. I was hooked from the very first chapters—partly because the book reminded me sharply of events in my own life and partly because there are so many brilliant character studies. The novel turns, subtly and heartbreakingly, on questions of hardship, parenting, love, and resilience. I was not prepared for how hard this book would hit me.

The first three quarters of On the Shores of Darkness, There is Light belong to Harriet Baggs. Harriet is an eleven-year-old who has had to grow up too quickly over the last six years. Her brother, Irwin, was born with hydrocephalus and requires constant supervision. He’s been in and out of the hospital since he was born. The expense and strain of caring for him split up their parents. Harriet, her brother, and her mother now live in low-cost housing, surrounded by curmudgeonly seniors and angry or depressed single mothers. They also share space with Harriet’s mother’s boyfriend, who is terminally broke and who Harriet views as an interloper. Harriet is surprisingly self-reliant. She makes money running errands for the seniors in her building. On the surface, she’s making it. Underneath, Harriet longs for the affection she used to get from her mother before Irwin was born. The loss of feeling loved, coupled with the fact that the adults in her life constantly misunderstand her, is making Harriet grow angry and bitter.

Poor Harriet. She’s prickly and foul-mouthed, but I felt deeply for her. The adults in her life, with the exception of a few of the seniors, have let her down badly. Her parents constantly make excuses and shift blame to others for their shortcomings. They ask (or, more often, tell) her to be less angry, morbid, and weird to make their own lives a little easier, not realizing how much Harriet does to keep things going sort-of smoothly. She appears to be so capable no one really sees how sad she is.

Harriet may strike some readers as far too precocious for an eleven-year-old. I wasn’t particularly bothered. She spends so much time with the strange, motley crew of seniors that I didn’t find it surprising that she could understand the beauty of William Blake, believe in the chance of a better life through reincarnation, or create sophisticated mixed-media. She’s chronologically 11, but her personality is a lot older. As I learned more about her, the more I wished someone would give Harriet a long hug and just listen to all her thoughts for a change.

The last quarter of On the Shores of Darkness, There is Life shift to Irwin and are set about nine years later than the first three quarters. Irwin, now 14, struggles with his condition (seizures, nausea, learning disabilities) and depression. On top of it, he has a very convoluted and dysfunctional family. The bright spot for him is his little sister (born to his father and his now second ex-wife), who is as devoted to him as he was to his older sister, Harriet. I can’t say too much about the last part of the book without giving away too many details of the gut punch Strube delivers at the end of Harriet’s part of the novel.

As I read this book, my thoughts kept returning to the idea of resilience. Some of the characters have a bit of grit to them. They can move on from terrible losses and injuries. On the Shores of Darkness, There is Light, however, is about what we can learn from the characters who, for whatever reason, cannot move on. We watch them as they fail to recover and become trapped either in thoughts of how their life was better before or with fantasies of the perfect life. By the end, I found I couldn’t judge any of them—though some of the characters made me very angry indeed. This book is one of the most human stories I’ve ever read.

I received a free copy of this book from NetGalley for review consideration. It will be released 12 April 2016.

Notes for bibliotherapeutic use: Recommend to teenagers who feel misunderstood and to the parents of those teenagers.