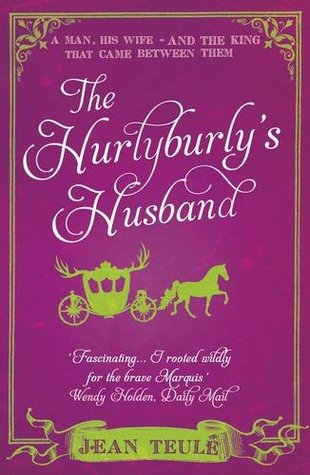 If it hadn’t been for their debts, we probably wouldn’t know about Louis-Henri and Françoise-Athénaïs. The two of them loved to gamble and buy new clothes and redecorate—but their combined incomes could not support their lifestyle. Louis-Henri went to war twice in an attempt to gain the king’s favor (and thus riches). His failures were farcical and Louis-Henri ended up even further in debt. Françoise-Athénaïs then takes matters into her own hands and secures a position as one of the queen’s ladies-in-waiting. It isn’t long before beautiful, witty Françoise-Athénaïs attracts the king’s attention and is offered a new position: mistress.

The Hurlyburly’s Husband, as the title indicates, centers on the husband, not the wife. Françoise-Athénaïs protests when Louis XIV makes his offer, but the king wields the threat of lèse-majesté whenever anyone tries to thwart his will. Lèse-majesté is a crime that only exists in autocratic governments. Essentially, lèse-majesté can be an excuse for the king to imprison, fine, or exile anyone who doesn’t conform to his desires. Françoise-Athénaïs submits, eventually becoming an incredibly powerful woman at court. Louis-Henri does not submit.

The bulk of the novel follows Louis-Henri as he continues to annoy Louis XIV by publically announcing his status as a cuckold and aggrieved husband. (The horns depicted on the corners of the carriage roof on the cover of the book reference Louis-Henri’s status.) At one point, he goes a little mad. Later, he turns down honors and money in exchange for his silence. He goes into exile to avoid prison on trumped up charges. He just will not keep quiet about the fact that the king stole his wife. He keeps up his semi-fugitive existence for more than twenty years.

It isn’t often I get a chance to read something as tragicomic as The Hurlyburly’s Husband. Louis-Henri is not always sympathetic, though he clearly is the wronged party here. His love for his wife is his tragic flaw; he just can’t let go of the hope that he will be reunited with Françoise-Athénaïs someday. In this book, Teulé has captured a remarkable character.

I received a free copy of this book from NetGalley for review consideration.