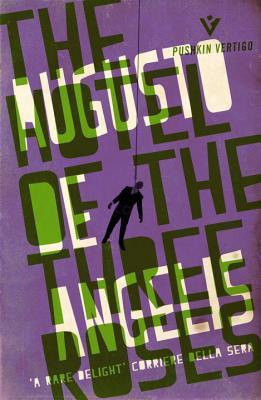 The Hotel of the Three Roses

The Hotel of the Three Roses, by Augusto de Angelis, is another title resurrected by Pushkin Press and Vertigo Press from the depths of obscurity. It was originally published in 1936, in Italian. While it is the seventh book featuring Commissario de Vincenzi (according to Goodreads), The Hotel of the Three Roses doesn’t really require any prior knowledge of the series. After a chapter or two to set the scene—a seedy hotel in Milan in 1919—the mystery begins. A man is found hanging at the top of the stairs at the hotel. Nearly every one of the hotel’s guests has something to hide, a shared secret no one wants to reveal to the dogged Commissario. Of course, secrets are impossible to keep in the midst of a murder investigation.

Commissario de Vincenzi knows that something’s not right at the Hotel of the Three Roses even before the murder is reported. He received an anonymous note about gambling, drugs, and threatened innocents the very morning Douglas Layng is murdered. De Vincenzi mobilizes his offers to secure the hotel and start questioning the guests. Some of the guest are willing to talk, up until the Commissario asks them if they know each other. Others clam up right away. When a lawyer arrives bearing a will and information that links most of the guests together, de Vincenzi tightens the screws on everyone.

The events of The Hotel of the Three Roses play out over a few very stressful days. There are moments of grim comedy when the doctor complains about being constantly summoned from his home to examine yet another dead body. Otherwise, the tension levels remain high as more clue come to light and guests starts to lose their cool.

I enjoyed the fact that the Commissario does not fit into the usual Golden Age detectives. He’s not arrogant about his intelligence like Holmes or Poirot. He struggles to figure things out along with the readers of the book. There are no hidden clues that he knew about and did not reveal. One of my favorite parts of the book is when de Vincenzi grows frustrated with himself. He knows he has many of the major pieces of the puzzle; he just can’t see how everything fits together. Even though he’s very brusque with the witnesses and suspects, I sympathized with him because I couldn’t see how the pieces fit together either. I enjoy feeling solidarity with the detective.

I received a free copy of this book from Edelweiss for review consideration. It will be released 3 May 2016.