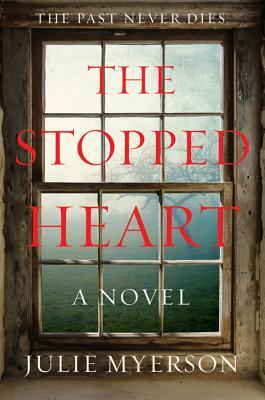 I’m not sure how to write about The Stopped Heart, by Julie Myerson, without spoiling it for other readers. I’ve had this problem before, but for other reasons. I usually worry about spoilers because there’s a big twist in the story or because the ending is amazing or because the plot doesn’t make sense without discussing the ending. None of that is true of The Stopped Heart. In fact, the opposite is true for this book. Myerson had me for most of the book—right up to the ending. Then she let me down.

The Stopped Heart is made up of two halves, set 150 years apart. In the 1860s, Eliza and her family peacefully run a farm until a disturbing man with red hair shows up after a storm. In the present, Mary and her husband have moved to an old farmhouse to try and cope with their grief after their daughters were murdered. The location links the two narrators—Eliza and Mary—as well as their experiences with men who become obsessed with them. Plus, there are ghosts.

For most of the book, the narrator builds up an irresistible sense of dread. (It did for me, at least.) James Dix, the man with red hair who falls in love with Eliza, begs and wheedles and threatens until Eliza returns his affections. I just knew something terrible is going to happen, even without the warnings from Eliza’s little sister, Lottie. Lottie had been having dreams about being murdered by James.

Meanwhile, in Mary’s timeline, her neighbor, Eddie, seems to be following the same pattern set by James 150 years before. He claims to fall in love with Mary at first sight. He calls. He shows up unexpectedly. Like James, he won’t take no for an answer and is constantly asking Mary what she’s thinking. What with all the ghosts, I wondered if Eddie and Mary were reincarnated versions of people from Eliza’s timeline, given another chance to either make things right or play out the tragedy one more time.

This is…not what happens at the end of The Stopped Heart. Usually calling the ending unexpected is a good thing because it means that the author didn’t follow a formula. All I can say is that, after a very interesting 400+ pages, I was disappointed.

I received a free copy of this book from Edelweiss for review consideration. It will be released 29 March 2016.

2 thoughts on “The Stopped Heart, by Julie Myerson”