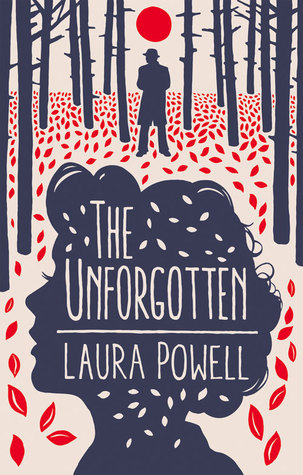 Most mysteries focus on the detective or the criminal and reveal who done it, why they done it, and how they done it. The Unforgotten, by Laura Powell, does something completely different. It tells the story of two bystanders who got caught up in a series of murders and end up carrying the guilt for their actions for fifty years. There are layers of mystery in The Unforgotten. While the protagonists investigate the actual crime, we readers investigate the protagonists to find out what secrets they’ve kept and why.

The Unforgotten is set in two time periods. In 1954, in a small Cornish village, Betty Broadbent helps her bipolar mother to run a hotel. The hotel has just been invaded by a horde of journalists, all trying to scoop each other about the Cornish Cleaver. Betty is curious and very observant. She might have become a precocious detective if she hadn’t fallen in love with John Gallagher.

Fifty years later, Mary Sudgen is breaking under the weight of her secrets. They’re making her absentminded and anxious. She’s making her family very worried. It takes several chapters for Mary to drop enough hints for us, the readers, to figure out who she really is and what she’s hiding. Her secret has to do with the man everyone thought was the Cornish Cleaver. Mary knows he was innocent, but she never spoke up in his defense. It will take the rest of the book for us to figure out why Mary kept her silence.

The Unforgotten moves back and forth from 1954 to the early 2000s. As we learn more about Betty/Mary and John, we see more of the consequences of guilt. Their dilemmas are the kind of stories I relish, but am very grateful to have never lived through anything that takes such an emotional toll. The novel, especially the ending, hit me a lot harder than I expected when I read the description on NetGalley. The Unforgotten is absolutely the kind of story that will leave readers wondering what they would have done.

I received a free copy of this book from NetGalley for review consideration. It will be released 17 March 2016.

One thought on “The Unforgotten, by Laura Powell”