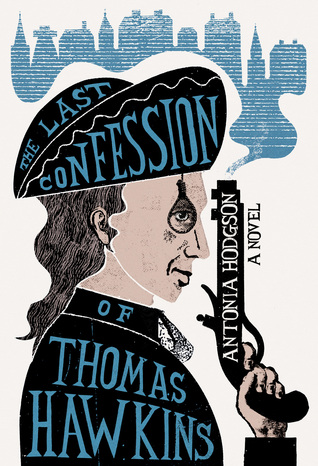 The Last Confession of Thomas Hawkins

One would think that his experiences in the Marshalsea debtors’ prison (chronicled in The Devil in the Marshalsea) would have set Thomas Hawkins firmly on the straight and narrow. It’s clear from the first pages of Antonia Hodgson’s The Last Confession of Thomas Hawkins that this has not happened. We rejoin our hapless hero as he is on his way to Tyburn to be hanged for murder. Hawkins reveals his sorry path to the gallows in flashbacks, hoping against hope that a pardon will come.

After being released from the Marshalsea, Thomas has lived with Kitty in relatively comfortable un-wedded bliss. Kitty inherited a dirty book shop, which mostly keeps them in coin. Thomas has returned to drinking, gambling, and wenching. He is bored. Fighting for his life has made anything less feel dull. I don’t think Thomas knew what would happen when he offered his services to James Fleet—the brother of the eponymous devil of the first book. If he had known what was going to happen, he tells us, he would have stayed far away from Fleet.

Thomas’s troubles begin when his neighbor’s maid sees a thief. Thomas tries to help, but only raises the ire of the hypocritically religious James Burden. Burden starts to spread rumors about Thomas once killing a man, then ends up dead. Thomas is the first suspect, of course, even though plenty of other people wanted Burden dead. Then Fleet calls in his favor and gets Thomas involved in a court scandal. Before long, Thomas has all the excitement he could want and more.

The structure of The Last Confession of Thomas Hawkins keeps the urgency of Thomas’s story from dissipating. As Thomas gets more embroiled in Burden’s murder investigation and the court scandal, we are reminded that he is getting closer and closer to Tyburn and time for a pardon is running out. It’s a clever device, skillfully deployed by Hodgson, and she adds a few twists and turns that make it clear that no one is going to figure out how the book is going to end.

The characters, plotting, and pacing of The Last Confession of Thomas Hawkins make for a wonderful read, but I have to mention how much I adore how Hodgson handles the setting before I wrap up this review. Mysteries set in more recent times don’t have to spend so much time on exposition as books set in the early 1700s. The 1720s are far enough removed that we need more information to help understand Thomas’s London. Hodgson is a historical fiction writer who has clearly done her research, but she doesn’t overwhelm us with details. The historical details are woven into the book in such a way that London of the 1720s comes back to full smelly, boisterous life without slowing down the relentless pace of Thomas’s story.

I received a free copy of this book from NetGalley for review consideration. It will be released 15 March 2016.