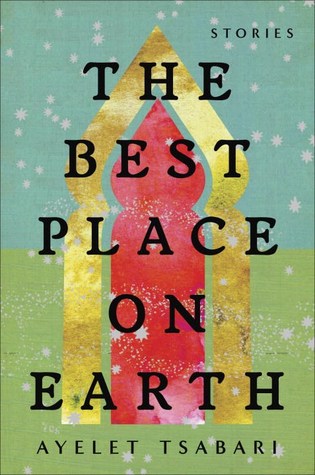 The Best Place on Earth

When I request books from NetGalley and Edelweiss, I ask for things that interest me. Then I put them on a list and sort them by date so that my review will appear closer to the publication date. Every now and then, I will be sent a book months before its publication. By the time I get around to reading it, I may have forgotten why I asked for it in the first place. Due to the vagaries of my interests and my self-imposed restrictions on when I read things, I get some strange juxtapositions. I finished and reviewed Lavie Tidhar’s A Man Lies yesterday and today I’m reading a collection of short stories about Yemeni and Mizrahi Jews in Israel and Canada, Ayelet Tsabari’s The Best Place on Earth. Tsabari’s stories are probably the best palate cleanser I could have chosen if I’d remembered the publisher’s description. Dumb luck is on my side this weekend.

The stories in The Best Place on Earth revolve around themes of tradition, loneliness, and identity. Unlike many stories about the Jewish experience, these ones do not revolve around religious practices in the main. Instead, Tsabari’s stories examine culture. The younger generations are expected to carry on the traditions of their parents and ancestors, but many of the characters in this book are seeking new ways of living. The conflicts come when they break away from their parents’ expectations. It can be lonely to break away, even if one has a partner, because no one can guide a person on their quest to figure out who they are.

“Brit Milah” – Reuma has traveled across the world to spend time with her daughter after the birth of her grandson. Reuma and her daughter used to fight like cats and dogs, but her grandson is a chance to reconnect. She has packed foods and spices from home to bring to Canada. She has strong hopes for this visit, but she and her daughter start to clash (though politely) almost immediately. The crisis comes when Reuma learns her daughter has no plans to circumcise her son.

“Invisible” – The main character of this story is one of the few non-Jewish characters in The Best Place on Earth. Rosalynn is the Filipina care-taker of an elderly Yemini Jewish woman. She doesn’t have papers anymore, so she keeps a low profile. Her days are spent listening to the old woman’s stories about life in Yemen and her near forced conversion to Islam as well as caring for the woman’s physical needs. When a traumatized Israeli vet moves into the shed behind the house, Rosalynn starts to come out of her shell. (This story is one of the sweetest in the whole collection.)

“Below Sea Level” – Most of the stories in The Best Place on Earth are about mothers and daughters. “Below Sea Level” is about a son and his father. David’s father was a career soldier in the Israeli Defence Force. For years, David’s father gave him grief for his lack of physical prowess and his sensitivity. The last straw was when David ducked out of his compulsory service. Now, years later, David has returned with his girlfriend to visit his father. Revelations about his father’s health may have made it possible for the two to find a way to heal their relationship.

I’m usually irritated by “finding oneself” stories because they so often reek of selfishness and indulgence. I never felt that in Tsabari’s stories, perhaps because what the parents here represent stagnation and/or continued war with Arabs. Why preserve a way of life if it means not only sublimating oneself to assimilate or to continue fighting in a never-ending war? Tsabari’s stories are not openly critical of Israeli policies. Rather, there’s a subtle theme of dissatisfaction that I picked up on. Neither are the stories particularly earth-shaking, but they provide plenty of food for thought.

I received a free copy of this book from NetGalley for review consideration. It will be released 8 March 2016.