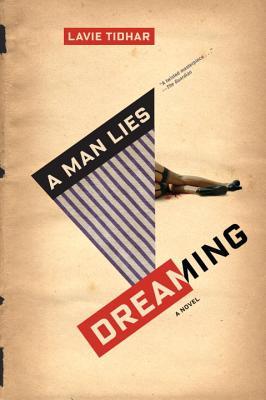 Perhaps it’s fitting that I read Hannah Tennant-Moore’ essay in The Paris Review about the merits of reading literature that disgusts and repulses us. Her words helped me through Lavie Tidhar’s disturbing work, A Man Lies Dreaming. The other thing that helped me through the scenes of, for lack of a better term, unorthodox sexuality and depictions of anti-Semitism was Tidhar’s virtuosity with ideas and genre. Not every reader will make it through this book, but those who do will be rewarded with a meditation on story and reality that will haunt for a very long time.

The title is a clue that the story we encounter on the first pages is not real. The bulk of A Man Lies Dreaming is not real, not even in the sense of fictional reality. Rather, the story of Mr. Wolf the private detective is a hallucination of a dying inmate of Auschwitz. Shomer—based on Yiddish shund, or pulp fiction writers, like Yehiel De-Nur—is starving and working himself to death. When he sleeps, he imagines the life of a noir detective in the London of an alternate timeline. The detective is based on a very famous historical figure and his story is littered with references to his actual identity. (I will leave the secret here for now.) Suffice it to say, the detective is a character who one cannot, under any circumstances, sympathize with.

Because I was aware of the metafictional nature of the story, A Man Lies Dreaming gave me a reading experience quite unlike any other other. Wolf’s story is littered with question of “what if?” What if Hitler had failed in his bid to become Reichskanzler? What if Germany had become a satellite of the Soviet Union instead? What would have become of the Nazi Party? Shomer, in his dreams and hallucinations, imagines Rudolf Hess and Klaus Barbie and Ilse Koch doing business in the shadows of a fascist movement headed by Oswald Mosley. Leni Reifenstahl is an actress in Hollywood. Remaindered copies of Mein Kampf are about to be pulped by the publisher. And Wolf is trying to track down a missing Jewish woman and infiltrate the budding British Zionist movement.

The plot itself isn’t the important part of A Man Lies Dreaming. Rather, the plot is a canvas for Tidhar to play with ideas that most people wouldn’t dare to touch. After all, who would have the guts to write a noir with this particular detective? Who would have the guts to trot out so many of the rumors about Hitler’s sexuality and use them in the same book narrated by a Holocaust victim?

A Man Lies Dreaming is offensive. The premise is repellent. And yet, somehow, Tidhar gets away with it. The parts were the perspective of the novel shifts back to Shomer are deeply affecting and feel true. Tidhar kept my attention was because the whole thing is a thought experiment. It’s all “what if.” Without Shomer, this novel would not have worked; it would have caused the uproar that Timur Vermes’ Look Who’s Back (Er ist wieder da) caused when it was published in Germany more than a year ago. Instead, the reviews A Man Lies Dreaming has garnered in the United Kingdom are positive. I can’t say that I enjoyed it, myself. I can say that I admire what Tidhar has done. I am going to be thinking about this book for a long time.

I received a free copy of this book from Edelweiss for review consideration. It will be released 8 March 2016.

2 thoughts on “A Man Lies Dreaming, by Lavie Tidhar”