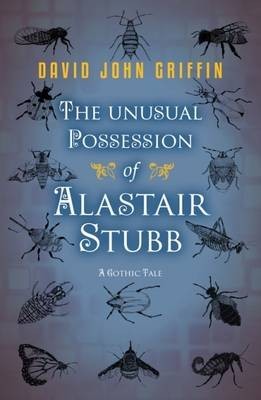 The Unusual Possession of Alastair Stubb

David John Griffin’s novel, The Unusual Possession of Alastair Stubb, is a curiously constructed tale of revenge. For the first several chapters, I wasn’t sure where the story was going to take me. Characters are introduced rapidly, so rapidly it’s hard to tell who the protagonist is at first. Then the plot picks up its pace. The setting is deeply sinister and there’s more than a hint that something supernatural and dangerous is at work. Even though I’ve finished, I’m still not quite sure what I think of this book.

The Unusual Possession of Alastair Stubb is divided into two distinct halves. The first half tells the story of Alastair’s parents, Eleanor and William. William is an unemployed coffin maker. Eleanor has only recently been released from an asylum—and she was only released because she lied about the hallucinations she was still having. Having no other options, the Stubbs live with William’s father, Theodore in his manor house. It doesn’t take long for us to learn that Theodore is far from benevolent. He uses hypnosis to abuse the women in his house. William and Eleanor cobble together a plan to kill Theodore after he rapes and impregnates Eleanor.

The first half of the book concludes on a harrowing day and night. Theodore vanishes after William tries to kill him twice. Eleanor also disappears, after giving birth to Alastair and suffering a terrible mental breakdown. The second half of the novel picks up thirteen years later in an abrupt shift of pace. And, while the events of the first half of the book can all be explained away rationally, the supernatural elements intensify in the latter half. In the second half, something seeks revenge on the people who tried to kill Theodore Stubb. The second half, for me, was much more disturbing than than the first half.

The writing style of The Unusual Possession of Alastair Stubb is striking—even bewildering at times. It reads like a demented fairy tale. We never really get to know any of the characters. The plot flies by and things just happen to the mostly hapless characters. The omniscient narrator’s perspective shifts between characters without warning, so it can be very hard to keep track of events unless one reads very, very carefully. The effect of it all made me feel as confused as poor, mad Eleanor when I tried to read as quickly as I normally do.

I just can’t make up my mind about whether I like this book or not, mostly because of the strange, shapeshifting writing style.

I received a free copy of this book from NetGalley, in exchange for an honest review.