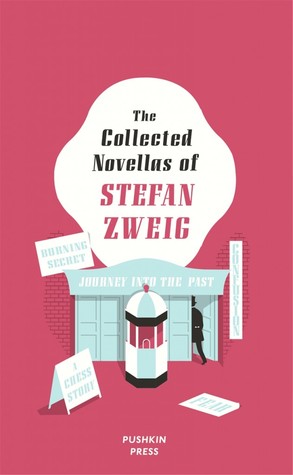 The Collected Novellas of Stefan Zweig

“Burning Secret” The first novella in the collection did remind me a bit of Anderson’s film. It starts with a character who seems like the main protagonist until he gives up his space on the stage to the actual protagonist. It takes place in a hotel and starts with a traveling baron on holiday trying to get into a woman’s good graces (and her bed). But it ends up being a quietly profound story about an unloved boy and his mother’s final acquiescence to being a parent.

“A Chess Story” This novella was my favorite of the bunch. It begins with a man spotting a chess master on a boat from New York to Buenos Aires. The man arranges matters so that the chess master plays against a group of fans, only to discover that one of the men on board is a master in his own right. This secret chess player taught himself to play from a stolen book while he was imprisoned by the Nazis. But his salvation by the game led to dangerous fanaticism. Does this secret chess player risk his sanity to take on the world’s reigning master?

“Fear” As she leaves her lover, a woman is recognized in this exquisitely written exploration of fear and shame. She pays off her blackmailer once, then twice, then three times. Her husband is a lawyer and she knows from him that blackmail always ends in exposure. She’s aware that she’s just buying time. The mere knowledge of this tortures her. How is she to escape her problems?

“Confusion” This novella broke my heart, but I had no idea that it would do so from the beginning. The novella opens with a scholar looking over a festschrift written in honor of his long and illustrious career. He notes that the festschrift makes no mention of the man who had the greatest impact on that career. After failing spectacularly at his first semester at a university in Berlin, his father sends the future academic to a new university in the interior. At that university, a professor of English lights his academic fire. Modern readers will probably pick up on what happens next before our narrator does.

“Journey Into the Past” Two lovers are on a train after being apart for nine years in this novella. This story may be a bit of an anti-climax to some readers because of its quietness after the preceding novellas, but it fits with the rest of the collection as another iteration of prohibited love, social standing, and longing.

This collection is brilliant. Zweig’s portraits of characters caught between their own desire and the boundaries custom and society have placed around them are keenly drawn. His Europe is gone, but the people Zweig created still live on the page.

I received a free copy of this ebook from NetGalley, in exchange for an honest review.