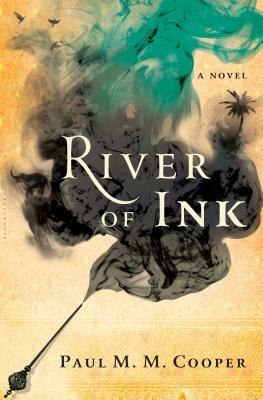 Throughout Paul M.M. Cooper’s novel, River of Ink, protagonist Asanka is taunted by his lover that “poetry does nothing.” For the first third of the book, this is easy to believe. Polonnuwara (northern Sri Lanka) has just been conquered by Kalinga Magha. The previous king had his eyes gouged out and was beheaded right in front of Asanka. Asanka is terrified of the new king, too afraid to act when others around him start resisting and rebelling. Besides, what can a court poet do anyway? By the end of River of Ink, we learn that a poet can be a hero.

Asanka doesn’t lose his position as court poet after the old king’s murder. The new king is paranoid and violent, but has aspirations to bring the glories of Hindu religion and culture to the island. So, in the middle of the violence, Kalinga Magha gives Asanka a task: to translate the Shishupala Vadha into Sinhala and Tamil from Sanskrit. The epic poem, which tells the story of Krishna killing the villain Shishupal, is extraordinarily complex. Even in peacetime, without a madman supervising the job, translating the Shishupala Vadha would be a huge undertaking. It’s a wonder that Asanka can take on even a small part of it without dissolving in a puddle of terror.

Surprisingly, Asanka finds a way to turn the mad king’s favorite poem against him. The sabotage starts small. First, Asanka starts to describe the villain of the poem using Kalinga Magha’s enormous eyebrows. The king doesn’t spot the caricature, but the people do. Asanka’s parody of the king gets bigger and bigger. By the end, Asanka is mocking the Hindu gods and heroes—to the delight of everyone who can see the comedy. The oblivious king helps spread the poem by having it copied and published as soon as Asanka completes a section.

While Asanka continues his subterfuge with the Shishupala Vadha, he has a mystery to unravel. He starts to receive short poems that break all the rules of poetry he spent his life mastering. The poems are narrated by characters from the Shishupala Vadha, explaining their motives and adding to the story. The secret poet helps Asanka make bigger changes to the original poem, pushing further into satire and mockery.

Throughout River of Ink, Kalinga Magha tells Asanka it’s his dharma to translate the Shishupala Vadha and bring it to the people of Sri Lanka. Dharma is usually translated as duty, but this misses the nuance of the word. Kalinga Magha believe that the poet’s dharma is whatever the king tells him it is. But in truth, dharma is a higher duty to do the right thing.

Does poetry accomplish nothing? Not in Asanka’s hands. In spite of his cowardice, Asanka’s translation takes away much of the fear people feel for the invaders and their new king. The king tells Asanka that it’s his dharma to translate the Shishupala Vadha and, while this might be Asanka’s fate, the poet still has the free will to decide how he will translate the poem.

I received a free copy of this ebook from NetGalley, in exchange for an honest review. It will be released 26 January 2016.