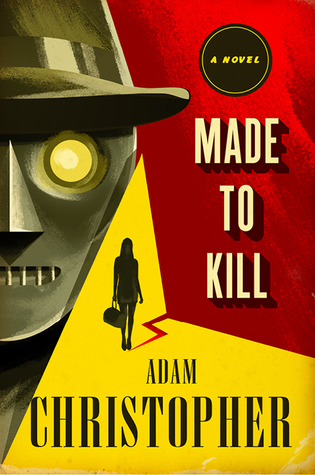 After reading Everything I Never Told You, I needed something completely different. Adam Christopher’s Made to Kill might as well have been made to order. The protagonist, Raymond Electromatic, is the world’s last robot. He works as a private detective in Los Angeles with the help of an early supercomputer called Ada sometime in the early 1960s. He’s not supposed to know that he is also an assassin because his memory tapes are erased every 24 hours, but he has flashes of memories anyway. Though Made to Kill is chock full of Cold War science fiction tropes, it’s a weirdly fun existentialist drama.

For Raymond, this adventure begins with a dame. A woman with a bag full of unmarked gold who refuses to giver her name arrives at Raymond’s office with a proposition. She’ll give him all this gold if he will kill Charles David, an actor. She won’t say why. Ada sees no reason why not. Given that Raymond depends on Ada to be his longterm memory, he doesn’t have a choice. He agrees to track the actor down and kill him. Things get hinky almost immediately. Raymond’s Geiger counter starts to go off while questioning David’s acquaintances. Then he discovers a Soviet plot.

The rest of the novel follows Raymond’s attempts to figure out what the hell is going on. As he pieces the clues together, Raymond also has to struggle with the fact that he has to start over every morning with no memories of what’s been going on. He has to rely on Ada to fill him in—which made me suspicious of Ada, even if the assassinations weren’t reason enough to wonder about her motives. Raymond’s basic personality is modeled after his inventor. That inventor seems to have been a trusting soul because Raymond never explicitly wonders what Ada’s goals are. He’s left with the question of who he is when all he has is a default personality and an entity telling him who he is every morning.

When I started Made to Kill, I wasn’t sure if I was enjoying it. The tropes were everywhere—noir-speak, Communists, mind control, radiation—and I wasn’t sure if the book wasn’t just a write-by-numbers effort. My apologies to Christopher for thinking this. I’m glad I stuck with the book because after the first third, it got very interesting as I got to know Raymond and his better. Made to Kill has two distinct levels. The top level is pure Cold War science fiction thriller. The more subtle layer about Raymond’s struggles for identity and agency were what made this book work for me.

I received a free copy of this ebook from NetGalley, in exchange for an honest review. It will be released 5 November 2015.