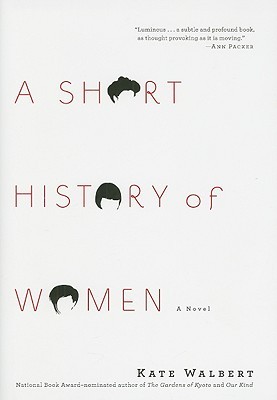 A Short History of Women

I am lucky in the way that the women in Kate Walbert’s A Short History of Women are not. Because I was born after more than a century of women’s suffrage and liberation movements, I had so many more paths open to me than the women in this book. I was never prevented from voting. I was never expected to use my college years to find a husband. I was never told I was unnatural because I don’t have children. It’s no surprise, then, that A Short History of Women is a short history of female anger and dissatisfaction.

A Short History of Women is not linear. It jumps through time, telling the stories of the women in the Townsend family. At various points, we meet a suffragette, her daughter, her granddaughter, great-granddaughters, and great-great-granddaughter. The first woman we meet is the suffragette’s daughter, Evelyn, who has just witnessed her mother starving to death in protest. Evelyn’s mother, Dorothy, chose to leave her children so that women might have the right to vote in the United Kingdom. It blows my mind that the Nineteenth Amendment will be 100 years old in five years. This means that women been able to vote in the United States for less than a century. I think about this every time I cast my vote. I think about the women who were jailed, were force fed, and died for the right to vote. Evelyn is more equivocal about her mother’s death. Though she seems to reject anything about her mother’s rabble-rousing ways, Evelyn becomes a pioneer by winning a scholarship and getting a chemistry degree—something her mother always wanted but couldn’t have in her time. The suffragette’s granddaughter is proud of her ancestor; a stamp with the suffragette’s image is Dorothy’s most treasured possession.

Over time, the Townsend women’s struggles grow ineffable. The original Dorothy Townsend, the suffragette, wanted to vote and to earn a college degree. Evelyn wanted a college degree. These are concrete goals. By the time of the second Dorothy Townsend and her daughter Caroline, the struggle revolves around the so-called work/life balance. Dorothy (the second) rebells against being a wife and mother late in life, becoming a protester in her own right (though much less effectual). The pressures on the latter Townsend women are more insidious. The pressures are harder to deal with because they can’t quite be articulated and, therefore, can’t be understood by others. The second Dorothy’s husband is bewildered by her and her children are angry with her. Why can’t Dorothy just be happy? Why can’t she just leave things alone?

A Short History of Women will leave readers with similar questions. Why can’t these women be happy? Why do they have to fight so hard and so long? What do they want? Though I wasn’t entirely satisfied with this book, I like that each member of the Townsend family was distinct and had their own battles to fight—though they wrestle with the same limitations on their gender. Women are individuals. What will make one of us happy won’t satisfy another. There as many ways of being a woman as there are women on the planet.

Notes for bibliotherapeutic use: Give to readers who want to know what women want, so they might learn that there is no one thing. Recommend also to women who struggle with who they want to be.