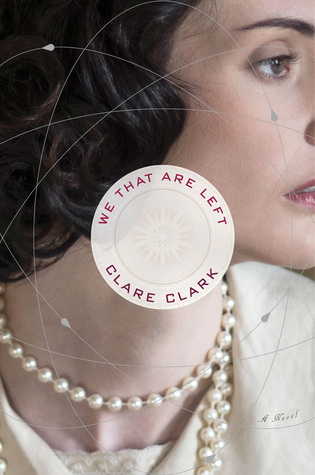 We That Are Left

When a loved one dies, their story ends. Their bereaved, however, have to find a way to continue with their own stories. After the Melville family loses their favorite son in battle in World War I, the pater familias retreats into scholarship and Lady Melville spends money on mediums. Clare Clark’s We That Are Left focuses on two (more or less) bereaved characters while also showing how others get lost in grief. It follows them from just before the war to about 1920. The two rarely meet (which may frustrate some readers), but their parallel lives are studies in filial duty, selfishness, and self-determination.

Before the war, Jessica Melville’s live was already mapped out. She would have debuted to Society like the other girls of her set. She would have married someone of equal or better rank. She would have produced an heir. The war renders the map worthless. Lady Melville has no time for her daughters; she’s busy trying to establish contact with her son on the other side. Even if Lady Melville were in a position to try and get Jessica married off, there are vanishingly few men for Jessica to marry. It takes  young Jessica a long time to realize this. (Long enough that I wanted to smack her upside the head more than once.) Because she has no one to guide her, Jessica leaves the family estate for London to make mistake after mistake.

Oscar’s chief difficulty is money. His mother is not wealthy. His father is long dead. Only his mother’s friendship with the family has made it possible for Oscar to go to Cambridge. Oscar is a budding physicist, keen to explore the new quantum physics that had just arrived on the scene. The Melville family is not done with him, however. First, Oscar falls in love with the oldest Melville daughter, Phyllis. Second, there’s Ellinghurst, the Melville estate.

The days of the great estates are over. There’s not enough income to pay for them and death duties are so expensive that many of them had to be sold. Jessica’s is most likely the last generation to live at Ellinghurst. The estate is entailed to a cousin who plans to sell it as soon as Sir Aubrey Melville dies. The only way to save the estate is for one or both Melville daughter’s to marry well. Phyllis doesn’t want to marry. Jessica is well on her way to becoming an odd woman because there is just no one to marry. Sir Aubrey is obsessed with saving his estate. He has one last gambit that may rope Oscar back into the family permanently.

Theo Melville’s death and Ellinghurst are the questions at the heart of We That Are Left: How do we go on? What is worth holding on to? What should be left behind? Jessica and Oscar are repeatedly tasked with shouldering the burdens of their parents’ generation. They never asked for Ellinghurst. Sir Aubrey rants about tradition, but is it a tradition worth keeping? Trying to saving the estate will probably ruin them, financially and emotionally. The benefit of hindsight would say that Oscar and Jessica should flee, to avoid going down with the ship. Staying means sacrificing the independent lives they were starting to build. And as if this wasn’t enough, Oscar discovers a shocking secret that makes the whole issue even more complicated.

We That Are Left asks us to watch lives spool out without much of a narrative arc. It shows us Jessica and Oscar growing up, stepping out of the shadows of the previous generation, then having to make a decision about breaking with or siding with that generation. While we watch, We That Are Left also shows us how World War I broke English society. Nothing can ever be the same. Tradition is fighting with a brave new world. We That Are Left raises questions for readers to ponder long after they’ve finished the last chapter.

I received a free copy of this ebook from NetGalley, in exchange for an honest review. It will be released 13 October 2015.