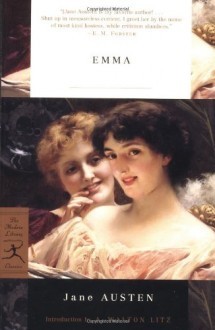 This month’s resolution read actually fit two categories. I’ve read Emma, by Jane Austen, before. I didn’t like it. I took a chance on it to see if I still didn’t like it. I know Emma is a big favorite with Austenites…but, I’m not one of them, even after my re-read. I’ve loved every other Austen novel I’ve read. I adore Pride & Prejudice, Persuasion, Northanger Abbey. I adore Austen’s gentle snark. Her characters make me laugh or make me want to hop into the book and be friends when them or just give them a hug. I didn’t get any of that from Emma.

Emma Woodhouse is a twenty-one year old girl who desperately needs to finish growing up. The trouble for Emma is that she doesn’t know this. The plot is a series of episodes that illustrate this. In the first third of the novel, Emma tries to create an attachment between her friend, Harriet Smith, and one of the most eligible bachelors in Highbury, Mr. Elton. It fails spectacularly. Emma discovers that Mr. Elton was only being nice to Harriet to please Emma, right before he proposes. The rest of her mistakes are smaller, but not any less embarrassing. She is rude to people she looks down on. She constantly misinterprets people’s emotions. She enables her father’s self-imposed invalidness. I don’t like her.

What I didn’t know about Emma—the book and the character—is that I’m not supposed to like her. Wikipedia quotes Austen via A Memoir of Jane Austen*, “I am going to take a heroine whom no one but myself will much like” (157). Emma is a terrible snob when it comes to class and rank. She immediately develops intense dislikes of any woman who might be her rivals.  She is so very manipulative! I feel sorry for Harriet. If Emma really were her friend, she would stop treating the poor girl like a pawn on a chessboard. But Emma Woodhouse stands out as a character because she is so fully realized on the page. We’re not supposed to like her; we’re supposed to learn from her. I can easily picture Austen cackling at her writing table as she details Emma’s misadventures.

Is Emma alive? Yes, very much so. We (I) may not like her. I definitely wouldn’t want to be her friend. The more I think about it, however, the more I think about what makes this book work and why people still read it. That’s a much better set of questions to ask about Emma.

Emma is an early sort of bildungsroman, a novel of a character growing up into the person they are. It’s fascinating to watch Emma grow up. She learns not to meddle so much. She learns that she’s not the wise matchmaker she thought she was. Fortunately, she retains her ability to tease and doesn’t become a bland, inoffensive creature. Emma looks to her neighbor and brother-in-law, Mr. Knightley, as a model for herself. She greatly respects his opinion on everything. He’s the only one who can (sometimes) check her worst impulses. I didn’t notice this the first time I read Emma, but Mr. Knightley is grooming Emma to be his wife. After Mr. Knightley proposes, Emma thanks him for his advice over the years. He replies:

Nature gave you understanding:—Miss Taylor gave you principles. You must have done well. My interference was quite as likely to do harm as good. It was very natural for you to say, what right has he to lecture me?—and I am afraid very natural for you to feel that it was done in a disagreeable manner. I do not believe I did you any good. The good was all to myself, by making you an object of the tenderest affection to me. I could not think about you so much without doating [sic] on you, faults and all; and by dint of fancying so many errors, have been in love with you ever since you were thirteen at least. (Volume III, Chapter XVII**)

Two years ago, Wendy Moore wrote a book about a philosopher’s attempts to train a young girl into the “perfect wife.” That was the first thought that popped into my mind when Knightley said that he had been in love with Emma since she was 13. Knightley is 16 years older than his bride-to-be. He’s been doling out advice for Emma’s entire life, presumably. The dynamics of their relationship—with Knightley as pseudo-father—make me very uncomfortable. Emma and Knightley are not equals in the way most of Austen’s other leading couples are. And if the partners in the relationship are not equal, can there be real love?

Emma is problematic, but I can understand why people keep coming back. I’ve thought more about this book more than any of Austen’s books. I wonder if I will still be bothered by it if I read it again in another decade and a bit?

** I read the Project Gutenberg edition of Emma. Page numbers are not available.

2 thoughts on “Emma, by Jane Austen”