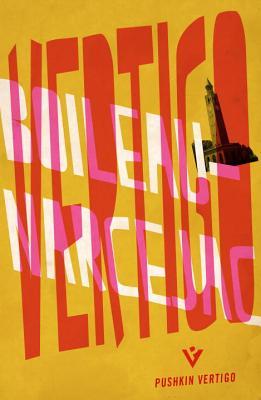 According to the note at the end of Vertigo, by Pierre Boileau and Thomas Narcejac, the two French novelists banded together to fight the tropes of Golden Age mystery. They took the genre post-modernist in Vertigo and She Who Was No More. They wanted to turn victims into conspirators and protagonists into perpetrators. The note gives Boileau and Narcejac’s one rule as “the protagonist can never wake up from their nightmare” (n.p.*). Those readers who’ve already seen Alfred Hitchcock’s film adaptation already know how well the authors follow that rule. While Hitchcock did a brilliant job taking us into the head of the protagonist, the original novel tells an even more engrossing and sinister tale.

Hitchcock changed the names and locations for his film. The original Vertigo takes place in Paris, just before and just after World War II. The detective is a lawyer named Flavières. An old, estranged friend named Gévigne comes to see Flavières one day. Gévigne tells Flavières that his wife, Madeleine, has strange spells where she will drift off, sometimes for hours, if no one is talking directly to her. This doesn’t strike Flavières as particularly strange, but Gévigne keeps trying to convince his old friend that there is something wrong with Madeleine. He even reveals that his wife’s great-grandmother committed suicide at the same age his wife is now. He says that his mother-in-law is worried that there is a predisposition to insanity and madness in the family. Eventually, Gévigne convinces Flavières to follow Madeleine around, if only to ease a worried husband’s mind. Flavières does so, against his better judgment, only to find himself falling in love with the quiet, elegant, melancholy woman that he doesn’t really understand and cannot really know.

Anyone who’s seen the Hitchcock film already knows what’s going to happen in the book. Hitchcock was quite faithful to the original story. (I accidentally spoiled the book for myself by reading the plot summary on Wikipedia.) What Hitchcock couldn’t capture was the experience of being in Flavières’ head. Once Flavières becomes obsessed with Madeleine, it became clear to me that no one was innocent in this book. In fact, I was more afraid of him than the putative murderers—especially once “Madeleine” resurfaces. The eponymous vertigo plays an important role in the plot, but it’s guilt that plays a stronger role in Flavières’ psyche. Eventually, even his guilt over two deaths he blames on his acrophobia are subsumed with his obsession over Madeleine. No, this isn’t quite accurate. Flavières is obsessed with who he thinks Madeleine is. When he meets Madeleine’s doppelgänger, it’s chilling the way he tries to recreate his lost love. The poor doppelgänger never stood a chance.

Once again, I am thankful to smaller publishers for resurrecting lost novels. Vertigo is an excellent, atmospheric, and terrifying thriller. Even fans of the Hitchcock film will find something new here. It’s a pity that Boileau and Narcejac didn’t get a chance to collaborate more if they were able to create a masterpiece like Vertigo on their second try.

I received a free copy of this ebook from NetGalley, in exchange for an honest review. It will be released 15 September 2015.

* Quotes are from a digital advanced reader copy of the novel, published by Pushkin Press in 2015.

2 thoughts on “Vertigo, by Pierre Boileau and Thomas Narcejac”