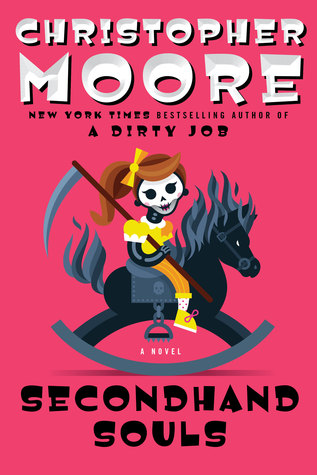 Christopher Moore’s A Dirty Job introduced us to Charlie Asher, a reluctant Death Merchant, widower, and beta male. Shortly after his wife’s death, Charlie receives a copy of the Great Big Book of Death informing him that his new job is to collect objects that serve as vessels for their owners souls once the owner is done with them. Charlie’s screw ups lead to the near takeover of the forces of darkness in San Francisco (the Morrigan and Orcus). Secondhand Souls picks up one year after the dramatic conclusion of A Dirty Job. Charlie’s soul is stuck, temporarily he hopes, in a meat puppet created by his Buddhist girlfriend. His daughter is being raised by Charlie’s sister and her wife. Life has carried on in San Francisco. So has death. Minty Fresh continues to collect soul vessels. Inspector Rivera has not, even though he knows he’s one of the city’s new Death Merchants. Rivera’s mistake means that the forces of darkness are once again on the rise and it’s up to the motley crew of fuck ups, goths, ghosts, Buddhist nuns, and the rest to make it right.

While A Dirty Job focused almost solely (no pun intended) on Charlie, Secondhand Souls is an ensemble book. We spend time with Minty Fresh and Rivera as they try to work out what’s going on with the city’s souls and the forces of darkness. We spend time with Charlie’s girlfriend, Audrey, as they try to work out a way to get Charlie’s soul back in a human body. We also get to spend time with Lily, one of my favorite characters in all of Moore’s books. She is a foul-mouthed goth who has far too much personality for her persona. There are new characters joining the cast. Lemon Fresh is Minty’s cousin, villainous and smoothly pragmatic by turns. Mike Sullivan is one of the paint crew for the Golden Gate Bridge who has just made the acquaintance of the ghosts that haunt the bridge.

Secondhand Souls‘ plots move in a lot of different directions. If I didn’t trust Moore to tie them all up at the end, I might have been frustrated trying to work out how the ghost play into the Death Merchants’ quest and who Lemon actually is and how Audrey’s going to move some souls around. I’d sum up the plot here like I normally do, but I’ve learned not to do that with Moore’s books. I’d be sectioned in a heartbeat. Suffice it to say, I was highly entertained by this chaotic, hilarious, ribald, soulful (pun intended) novel.

There are two things that make me love Moore’s novels. The first is the silly, whipsmart humor in every single one of his books. Moore’s books always make me laugh to the point making embarrassing noises. Lily makes me howl. Charlie makes me chuckle and want to smack him upside the head. The other thing that keeps me coming back for more is the heart that is each book. Every book I’ve read (more so in the more recent books) contains a poignant question about grief or loyalty or the nature of death or love or connection at its heart. Under all the layers of wisecrackery and anarchy, Moore addresses these questions in such a way that I feel comforted after contemplating the book for a while. Moore’s novel Lamb is one of the few books that can make me laugh and actually cry.

I received a free advanced reader copy of this book from the publisher while I was at the American Library Association Annual Conference. It will be released 25 August 2015.