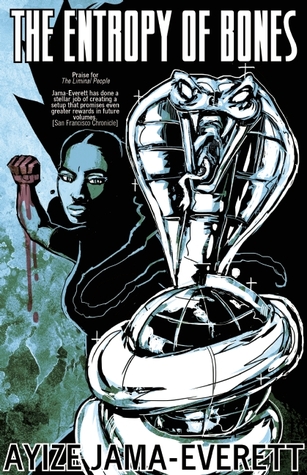 The Entropy of Bones

I’m glad I read The Liminal War only a few months ago. The plot of The Entropy of Bones, by Ayize Jama-Everett, is so closely entwined with The Liminal War that they ought to be read back-to-back. In fact, it’s going to be tricky to write about this book without giving away spoilers for both parts of the series.

The first book in the series, The Liminal People, introduced us to humans with extraordinary powers. Taggert broke free from the warlord who ran his life in that volume. In The Liminal War, Taggert and his allies learned that the warlord was just a front for creatures of entropy who want the death of every living thing. The creatures, Alters, are at war with the god of connections. The climax of The Liminal War lead to the creation of an alternate timeline…which is where The Entropy of Bones begins.

The protagonist of this book is a mysterious woman who briefly appeared in The Liminal War. In this book, Chabi is not the captain of a ghost ship, looking for her lost teacher. We meet Chabi before she begins training with Narayana Raj—a name that will be familiar from The Liminal War. Weirdly enough, Chabi begins training to fight because her mother told her that if she wants to go to public school, she’ll need to learn how to protect herself. Narayana takes Chabi far beyond schoolyard fighting. Beginning around age 11 or 12, Chabi is able to run fifty miles and swim thirty and break every bone in an opponent’s body.

For most of the book, we watch Chabi become a deadly weapon. It’s not until the halfway mark or later that Chabi finds herself on the front line between the Alters and the good guys. In fact, the ending seems a little rushed and there’s a little too much info dumping to catch Chabi up with what she is, and what the Alters and the stakes are. This is my only criticism, and I think it’s just a product of having to fit Chabi’s story into the existing narrative. In that sense, The Entropy of Bones reminded me of Wicked. Like Chabi, the author created an amazing backstory for Elphaba and made the character so strong that it was a pity that she was trapped by the way the story had to end.

Chabi fascinated me and she broke my heart. For years, all she wanted was to hear Narayana praise her. He was a father to her. When he left, it destroyed her. What does a weapon do with no one to point her at a target? Chabi doesn’t start fights, after all. She ends them. When a character from the future (well, a future) asks her to join them, tells her she is their only hope, Chabi has no one to turn to for advice. Everyone wants something from her except her mother—who has no idea what’s going on and Chabi isn’t about to let her know about the Alters.

And the ending…Oh, the ending of this book was beautifully tragic. The Entropy of Bones has its issues, but the rest of the book—the characters, the world Jama-Everett created, that ending—make up for the pacing and info dumps. I am absolutely looking forward to finding out what happens next

I received a free copy of this ebook from Edelweiss, in exchange for an honest review. It will be released 11 August 2015.

Notes for bibliotherapeutic use: Recommended for readers who need to see a woman who has an interior life kick some serious ass.