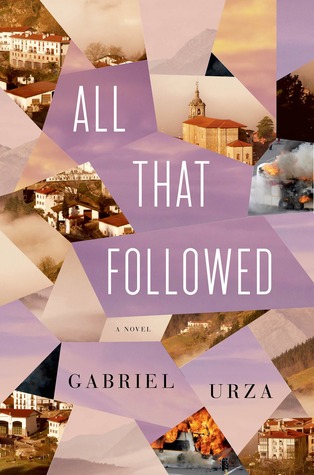 Sometimes I wish I lived in Europe or Asia or Africa, some place that’s soaked in human history. North America has its history, of course. It’s just not my history; my ancestors came from thousands of miles. I often wonder what it would be like to live somewhere where my family has lived for centuries. I wonder what it would be like to point to an old building and know that it’s been around longer than the United States, with a history of good and bad events as it has been adapted over the years. Gabriel Urza’s All that Followed has set me to wondering again. The novel is narrated by three voices, all inhabitants of Muriga, in the Basque Country. Mariana is a returned Basque, whose husband was murdered for his politics. Iker is a native Basque, one of the murderers, who was sucked into separatist rhetoric. Joni is an American who has lived in Muriga longer than most of the other characters have been alive. The murdered politician is the wheel hub around which the plot of this book spins, but All that Followed is very much about those who are still alive.

I had to spend some time on Wikipedia to catch up on the history of the Basque Country and the Euskadi Ta Askatasuna, terrorists who have been fighting for Basque nationalism for decades, to fully understand this book. This isn’t a criticism; I just wanted to know more about the political undercurrents of Urza’s novel. Though Basque Country has been semi-autonomous since the late 1970s, the ETA was still active in the 1990s when the bulk of this novel is set. By the 1990s, however, separatism and terrorism are more a game boys play at in Muriga than anything else. Mostly, they dress up in black hoodies and put black bandanas over their mouths and throw rocks and fireworks until the police come. The police fire some rubber bullets. The boys disperse. That’s about it, until one of Iker’s friends gets even more radicalized. They burn a bus. Then they kidnap and kill a conservative politician: Mariana’s husband. Iker narrates his part of All that Followed from a prison in the Canary Islands. He is full of regret—not so much about the politician—but for his lost future.

Mariana’s chapters reveal that she is a deeply unhappy woman. She has fallen out of love with her husband and being a mother isn’t enough to fill her time. When her kidneys shut down after her daughter’s birth, her husband diagnoses Mariana with depression and thinks she’s malingering. Mariana eventually receives a kidney transplant and becomes obsessed with the man she thinks was the donor. She feels and smells things she doesn’t remember experiencing before, believing them to come from her new kidney. Nothing shakes her out of her obsession until she starts an affair with the American who’s replacing Joni as the English teacher in the local secundaria (high school). Then, her husband is kidnapped and murdered and all her secrets get bandied about the town.

Joni’s chapters were my favorites. He’s Mariana’s friend and Iker’s teacher; he’s the living link between the two characters while Mariana’s husband is the dead one. Joni’s chapters show him to be an elder, not just chronologically, but in wisdom. He’s seen it all. His wife, who died in not-so-accidental circumstances with their young daughter in the 1950s, saw her father killed by Francisco Franco*’s troops during the Civil War. He saw the ETA’s founding in 1959 and their bloody trail through Basque history over the years. Now he sees boys like Iker get swept away with the supposed glamor of being a “freedom fighter” in spite of their comfortable lives. Unfortunately, his advice to Iker isn’t heeded in time. Joni is a little more successful with Mariana. Joni tries to offer Mariana advice on her relationships and obsessions, to help her avoid the same tragic ending his wife met. And yet, though he speaks from years of experience, the young go on to make their own mistakes before learning how right Joni was. His advice is timely. The problem is that the recipients understand what Joni meant much too late.

On the last page of All that Followed, Joni reflects:

I remember the saying I heard once, how the Basque Country’s history can be divided in half by the Civil War, and it occurs to me that perhaps the bullet has never stopped moving through our town. That it is still traveling through Muriga, striking one of us down every now and again. (Chapter 54**)

These two sentences perfectly stated what I had been struggling to articulate about the effects of the past on the people of Muriga. Each generation thinks its new and original, but they are responding to the previous generation, who are responding to the generation who preceded them—all the way back to the bullet that killed Joni’s wife’s father. Living in a country with so much history—bad blood, war, tradition, an isolate language—can be crushing. One might think that All that Followed is fatalistic and depressing, but I don’t feel that way. I could see the decisions that led Iker to prison and Mariana to realize her flaws. There’s still a little hope that next time things will go right and the bullet will finally stop taking lives.

All that Followed is a beautiful, complicated, human book. It was a privilege to read.

** Quote is from the 2015 advanced reader’s copy, ebook version, by Henry Holt and Company.