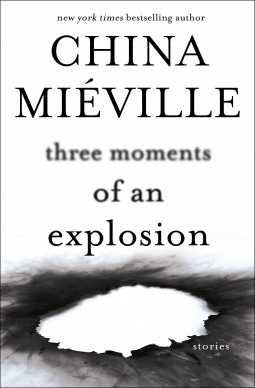 Three Moments of an Explosion

Everything I’ve read by China Miéville is an exercise in weirdness. Three Moments of an Explosion, his new short story collection, is no exception. The stories range from summaries of movie trailers and flash fiction length vignettes to longer stories that, for me, seemed like the first chapters of unwritten novels. Most short story collections are uneven. Some stories are outstanding, others bland or unready for publication. Three Moments of an Explosion, however, is one of the most consistently enjoyable collections I’ve ever read. I have my particular favorites, of course. But even the stories that I didn’t care for were still pretty good.

There are 28 pieces—for lack of a better descriptor—in Three Moments of an Explosion, so I’m going to write about the four stories that hit me hard. All four are longer stories, but they’re weren’t nearly long enough for my curiosity.

“The Buzzard’s Egg” is written in the second person—which normally bothers me enough to make me stop reading, but it works here—as a slave addresses what turns out to be a statue of a god from a nation in the process of being conquered. The slave’s masters captured him years ago and set him to watching the god of his people. The unnamed man now attends to all the gods of the cities and peoples his masters are busily attacking. He is only supposed to maintain the minimum rites, but he spends so much time alone it’s not surprising he starts to talk to the gods in his charge. We learn about faith and despair from this unnamed man. We also learn about the limits of slavery. After all, a man can only be pushed so far.

“The 9th Technique” is a disturbing story that hooked me from the beginning. It begins in the Precise Diner, where certain transactions between soldiers and magicians take place. The new methods of warfare have create a dark form of magic that Koning, our protagonist, and others want to tap into. The techniques refer to the 10 methods of “enhanced interrogation” the CIA used at Guantánamo and dark sites. The 9th technique involves placing a subject into a coffin-like container and telling them that there is an insect in there with them. Koning wants the first insect that was used for this for undisclosed purposes. As the story evolves, Koning leads us to meditate on how the dark magic of torture affects its practitioners as well as its victims.

I think “Dreaded Outcome” is the story I enjoyed most. It begins as the story of a therapist who works with patients who currently have or have had “toxic” people in their lives who make their anxiety or self-esteem or depression worse. The therapist who narrates the story is an advocate of traumatic vector therapy. When we first learn of it, TVT sounds like any another psychological therapy. It’s based on earlier methods, borrows from others, to create a syncretic technique for helping patients overcome the effects of toxic people. Then the twist comes and we learn that TVT involves more than talking and thought exercises. I don’t want to ruin it, so I’ll stop here.

“The Junket” is a terrifically timely story. It’s narrated by an unnamed pop culture journalist and the facts of the story are slowly doled out as the journalist investigates Daniel Cane. Cane was murdered shortly after his movie debuted by as yet unknown assailants. We learn that the movie violent and possibly anti-Semitic. The big debate about the movie is whether Cane was being ironic or not. The journalist talks to proponents of both sides. It’s only at the end of the story that the title of the movie and Cane’s manner of death are revealed. Because Cane is dead, the debate is never settled. “The Junket” is a wonderful exploration of the power of stereotypes and racism, though it makes me despair of ever living in a post-racist world.

Miéville’s narrators are often unnamed. About half are female. Race is rarely mentioned. Weird things happen, but because the narrators are just our portals to the story, it’s easy to read oneself into the story. How would you react to oil rigs that climb out of the sea to spawn? Or to floating icebergs and factories overgrown with rainforest? What would you do if your girlfriend was taken by a vengeful ghost in a German lake? Miéville is known for his strange settings and fondness for insects, but I would argue that the weirdness is just a means of throwing a reader off balance enough to look at the world in a new way. The oil rig story is not really about oil rigs; it’s about how humans think (or don’t) about the long term consequences of interfering with the environment. (I could be wrong, of course. Maybe “Covehithe” really is about oil rigs.)

The reason I usually stay away from short fiction is the length of the stories. Only a few short stories are the perfect length. (Angela Carter is the exception to this rule. All her stories are as long as they need to be and no longer.) The stories that I really enjoy are never long enough for me. I want to know more about the characters and I want to know what happens next. A lot of Miéville’s stories in this collection stop just after a critical decision has been made, leaving the reader in ambiguity. This is going to bother a lot of readers. I like the ambiguity because it leaves endless room to wonder about the multiple meanings of the stories. Three Moments of an Explosion is a great book to pass around with friends, so that one can have those arguments about what’s happening and what it all means.