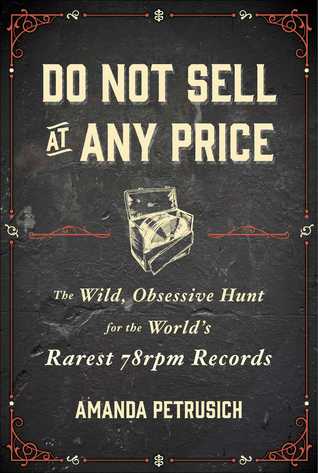 Do Not Sell at Any Price

Last spring, I read John Jeremiah Sullivan’s long article for The New York Times Magazine, “The Ballad of Geeshie and Elvie.” The article, which recounts the sparse knowledge we have about two of the most sought-after recording artists of 1920s country blues, was my first introduction to the world of 78 collectors. 78 records were the second generation of recorded music; the heavy shellac records were more durable than their wax cylinder predecessors but not as user-friendly as the 45 and 33 1/3 LPs that would follow. Not many survive these days. Competition for them is fierce. The collectors Amanda Petrusich meets in Do Not Sell at Any Price: The Wild, Obsessive Hunt for the World’s Rarest 78rpm Records have many reasons for spending years of their lives and thousands of their dollars tracking down them down. For myself, I’m glad these people are around. Without them, we would have lost amazing, powerful, honest music. We might never have heard Geeshie Wiley and Elvie Thomas’s “Last Kind Words Blues” or Robert Johnson’s “Hell Hound on My Trail.”

Do Not Sell at Any Price is a meandering book. It tracks the author’s journey into the world of 78s after being assigned to the topic by her editor. Petrusich has been a music journalist and critic for years, long enough to be jaded by the industry and the thousands of CDs she’s been sent for review. For Petrusich, music is everywhere and, therefore, cheap. The exact opposite is true of 78s and their collectors. Petrusich first makes content with John Heneghan. Most collectors won’t talk to her, but Heneghan provides entré into the community. Through Heneghan, Petrusich learns that many collectors are secretive for a variety of reasons. Some are a little ashamed of their obsessions. Others are paranoid about their collections and don’t want others to know what they have. Others are happy to talk about the music itself, but not the collecting. Still, Petrusich learns the ropes and even gets a touch of 78 fever herself.

What fascinated me about 78 collectors was how willing (some) of them were to play their records for others. 78s are fragile. Drop them and they’ll shatter. They require players capable of 78 revolutions per minute and special needles to play. A lot of 78s are in poor condition after years of neglect and wear. (If you listen to “The Last Kind Words Blues,” you’ll hear a lot of static and fuzz. This is the only known recording of the song.) Still, there are many passages in Do Not Sell at Any Price where Petrusich has hours’ long listening sessions with collectors. Many of the collectors she meets have sidelines remastering 78 records and releasing them as compilations for businesses like Yazoo Records. Christopher King made his collection available to help with the soundtrack for the 2011 film Ghost World. Other collectors work with the Library of Congress and American folk organizations to preserve and digitize 78s. It’s the sort of thing that makes both audiophiles and librarians giddy. Except for the most secretive and cantankerous collectors, the music is meant to be played. 78s shouldn’t be hoarded.

Early in Do Not Sell at Any Price, Petrusich sets up a debate that will last the course of the book. Is the power of pre-World War II music inherent or does it require context to understand and enjoy? Petrusich argues for the first position. Her descriptions of music focus on the raw, cathartic emotion of the singers and musicians. When Chris King sends her a demo copy of a compilation of Albanian and Greek music he’s working on, she reports being hooked by its profound sorrow and the longing in the violins and voices. Yet almost every collector she meets insists on contextualizing the music by telling her about the history of Paramount Records and race records, the shoddy pressing of most 78s, and the biographies of the performers.

Listening to pre-war music (as I have been while writing this review) can be a strange experience. Instruments are not electrified. The male voices are high, the women’s low and growling. Phrasing is odd and dialects are pronounced. I like the music because I can hear the honesty in it. Its lack of production values appeal to me. I can also hear in pre-war blues the roots of the rock and roll, electric blues, and rhythm and blues I grew up on* (thanks to my mom, who made me the kid with the most anachronistic taste in music in school**). Reading was slow because I kept stopping to listen to various songs on Spotify—which the 78 collectors would be the first to bellow is not the same thing—but I adore old, old blues and jazz***.

Towards the end of Do Not Sell at Any Price, Petrusich brings up an important wrinkle in the tale of collectors resurrecting lost masterpieces. What 78s we have now and the artists we laud now, like Robert Johnson and Charley Patton, are still around because the first generation of 78 collectors saved them. Most 78 collectors are white and male. Petrusich quotes scholar Elijah Wald on how our knowledge of pre-war blues has been shaped by the collectors:

As white urbanites discovered the “race records” of the 1920s and 1930s, they reshaped music the music to fit their own tastes and desires, creating a rich mythology that often bears little resemblance to the reality of the musicians they admired…By emphasizing obscurity as a virtue unto itself, they essentially turned the hierarchy of blues stardom upside down: the more records an artist had sold in 1928, the less he or she was valued in 1958. (179****)

Collector and scholar Ian Nagoski concurs, “Skip James does not represent prewar blues. Barbecue Bob does…Skip James is a weirdo. He’s a freak. He doesn’t really fit in, and the fact that he’s such a big part of the blues canon is a direct result of the blues canon having been written by white men” (180). Bessie Smith is one of the few pre-war celebrities to actually buck this trend. Bessie was the highest paid female entertainer (black or white) of her time. That said, she does have the rawness and iconoclastic lyrics and singing that appealed to the ethos of mid-century 78 collectors.

I know Petrusich’s overloaded sentences and the wandering structure of Do Not Sell at Any Price will put some readers off. I read these idiosyncrasies as enthusiasm for the subject. I had a great time with this book, even if I had to keep running to Spotify to listen to what I was reading about. The book hooked into the fascination John Jeremiah Sullivan’s article sparked last year. I will never be a 78 collector myself. (My spare cash goes to pay for books, my first true love.) But I can enjoy the music that the collectors rescued from dusty attics and dirty porches and sweaty flea markets—from the high tide of history itself.

* Some of my favorite compilations of country blues are the Roots of… series. The series, created and produced by Proper Box Records UK, re-releases songs that Led Zeppelin, Jimi Hendrix, and others recorded by their original performers.
** While other kids listened to 80s pop, I was listening to what my mom grew up with. She used to listen to radio from Chicago in the 1960s and 70s and fell in love with Smokey Robinson, the Temptations, Sam and Dave, the Beatles, Jimi Hendrix, Janis Joplin, Led Zeppelin, and others. To this day, I have an aversion to music that I perceive as “soulless”—overproduced, written by others, and generally lacking in real feeling.
*** Early jazz, hot jazz, not mid-century no-melody, how-long-can-we-keep-grooving-before-the-audience-starts-throwing-stuff-at-us jazz.
**** Quotes are from the 2014 hardcover edition by Scribner.