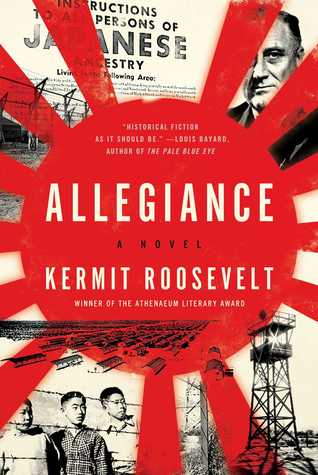 In the Author’s Note at the end of Kermit Roosevelt’s Allegiance, Roosevelt writes, “The story of America is a story of trying to live up to our ideals, of falling short, and of trying again. Thinking about the past, is one way we may hope to do better next time” (n.p.*). Allegiance centers on the decision by the US Government to intern Japanese Americans in a series of concentration camps across the country, allegedly to prevent them from participating in sabotage. A series of Supreme Court cases—Hirabayashi v. United States (1943), Korematsu v. United States (1944), and Ex parte Mitsuye Endo (1944)—established that curfews and evacuation from the Pacific Coast were legal for Japanese Americans, but continued detention in concentration camps were not. The Hirabayashi and Korematsu cases were later overturned (but not until the 1980s) because evidence finally came to light that there was no disloyalty or widespread risk of sabotage. The internment of Japanese Americans provides the background for Cash Harrison’s violent disillusionment about the law, the Supreme Court, the Department of Justice, and even his own family friends.

After the Japanese attack on Pearl Harbor, Cash Harrison—recent graduate of Columbia law—literally runs out into the streets to volunteer for one of the armed services with his friends. His fiancée eventually persuades him to wait, but it isn’t long before his number comes up for the draft. When he fails the physical, Cash feels a strong sense of thwarted duty. He’s left behind as most of the men of his generation enlist or are drafted and are sent to Europe, Africa, or the Pacific. When he received a call to clerk for Justice Hugo Black, Cash sees is as an opportunity to do something for his country.

Cash discovers, shortly after arriving in Washington, that not all is right with the Court. Someone is manipulating the selection of clerks in the hopes of manipulating the justices. The Court is hearing business cases that should have been rejected. And, worst of all, the Court is being deceived into upholding the evacuation and continued detention of Japanese Americans. This is the brief summary of the events of Allegiance. It’s much more complicated in the book. The Author’s Note makes it clear were history leaves off and fiction picks up and Roosevelt’s pacing brings a sense of messy verisimilitude. Some readers, however, might want a cheat sheet to keep track of characters and cases and motivations and plots.

As I read Allegiance, I thought of the fact that history has been repeating itself in that politicians are using the continued threat of terrorism to justify acts that are absolutely unconstitutional. And yet, the Supreme Court has been mostly silent on the endless detention of suspected enemy combatants at Guantanamo and black sites, extensive surveillance of the electronic communications of American citizens without warrants, and “enhanced interrogations.” As I see it, the Constitution is not just a blueprint for our government. The Constitution sets out what our Founders wanted America to be. We were supposed to be so much more just and free than we are or have been in the past. We have failed our ideals. And as Roosevelt points out in the Author’s Note, looking to our failures in the past can, maybe, provide inspiration to do better next time.

There is one more thing to mention about Allegiance. The book is littered with very dry jokes. Even though parts of the book had my blood boiling, Roosevelt got me to laugh several times. Here is my favorite joke. Cash has just been beaten up by unknown assailants. His friend and fellow Supreme Court clerk, Gene Gressman, insists on calling the attackers “economists”:

“Because it was the invisible hand.” (Chapter 15)

I received a free copy of this ebook from NetGalley, in exchange for an honest review. It will be released 23 July 2015.

* Quotes are from the 2015 advanced readers’ copy (kindle edition) by Regan Arts.