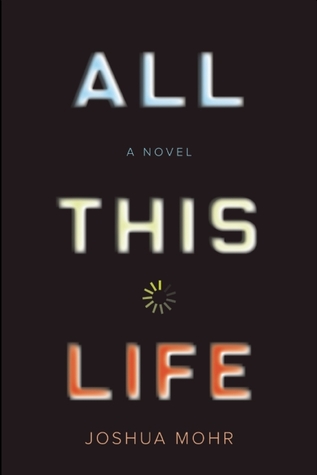 I can remember when my dad first got us online. We had AOL and it made an obnoxious sound while the modem connected. Since then, I’ve been online—almost every day since I became a librarian. But I don’t think the Internet is as much as part of my life as it is for the characters in Joshua Mohr’s All This Life. For Jake, the Internet gives him a way to be noticed. It ruined Sara’s life. The Internet constantly reminds Noah of how he failed his sister. All This Life is an exploration more than it is a traditional novel. It puzzles me.

For most of the novel, the main characters are far from each other, geographically and emotionally. Jake and Noah live in San Francisco and are only tangentially connected. Sara lives in a town called Traurig in an unnamed desert state. (She isn’t connected to Jake or Noah, and doesn’t even meet them until the end of the novel.) As the novel begins, Jake is in the backseat of his dad’s car as they drive across the Golden Gate Bridge. Jake likes to film people in other cars, catching them while they do the slightly embarrassing things people do when they think no one is watching, then putting his videos on YouTube. Today, Jake catches sight of a large brass band coming from the opposite direction. He trains his iPhone on them and keeps filming even when they start to throw their instruments over the side of the bridge before jumping to their deaths.

Noah’s sister was one of the women who jumped from the Golden Gate. It is never explained why. Noah thinks back over the past few months as his sister spent more and more time at band practice, but he never talked to her about it. Now he’s left with questions: his own and questions from family and friends that he can’t answer. It doesn’t help that Jake uploaded his video of the mass suicides and it went viral.

Meanwhile, in Traurig, on the same day as the suicides, Sara learns that her boyfriend posted their sex tape online. Her phone goes crazy when the rest of the town finds out about it. We never hear from the boyfriend as Sara deals with the fallout and the shaming. She’s suspended from her job “until all this dies down” and the boyfriend won’t answer her texts. The video spurs her to leave Traurig once and for all, with her friend Rodney in tow.

The characters only start to move towards each other at the very end of the novel, purely by accident when Sara’s friend’s mother is kidnapped by her roommate. There are only glimpses into the mind of the character, Wes. To be honest, these glimpses look like insanity. Wes is obsessed with connection. He believes that he can mathematically make his mind reach out to other people’s minds. Because we only get glimpses, I had a hard time understanding him the way I grew to understand Jake, Noah, Sara, and Kathleen (Rodney’s mother). If All This Life had been written from Wes’s perspective, I think Mohr would have been able to take us along with the madness so that Wes would have been a more integral part of the story instead of a strange tangent.

I feel that the kernel at the heart of All This Life eludes me. I don’t know what I’m supposed to take away from it. Because the novel centered on characters other than Wes and Noah’s sister, I felt cheated out of a more interesting story.

I received a free copy of this ebook from Edelweiss, in exchange for an honest review. It will be released 14 July 2015.