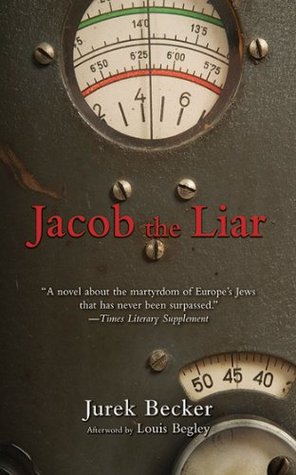 Is there such a thing as a good lie? Whenever this question comes up, I imagine that most people can agree that white lies are fine. Without them, we’d probably be perpetually annoyed with one another. But when the lies get bigger, it becomes harder and harder to say if a lie is justified—a “good” lie—or not. Jacob Heym, the unwitting hero of Jurek Becker’s Jacob the Liar, wasn’t thinking about whether his lie was a good one or not when he told it. Jacob’s lie just slipped out. But his lie changed the lives of hundreds in the Łódź ghetto in the last year of the war.

Jacob’s story is told by an unnamed narrator, who actually meets Jacob after the events of this novel. Throughout the book, the narrator is careful to establish his bona fides by telling his audience that he tracked down witnesses or pointing out where his knowledge ends and he has to start inventing. Jacob’s career begins with dumb luck. He is caught just before curfew by German sentries and sent to the gestapo offices. There, he overhears a radio broadcast announcing that the Russian army is within 200 miles of Łódź. The man Jacob is supposed to report to send Jacob back to the ghetto with a warning. The next morning, Jacob shares the news with a man who works with him in the freight yard. Rather than actually telling Mischa how he found out about the Russians, he blurts out that he as a radio. And because no one can actually keep a secret, the news spreads across the ghetto. Before long, Jacob is being pestered by people for more news.

Jacob is not just an unwitting hero. He’s a very reluctant hero. He’s prickly and quick to anger over what others see as trifles. He wasn’t much before the war—just a seller of latkes and ice cream and lemonade. He’s not much in the ghetto, either. He takes care of an orphaned girl and works in the freight yard. At least, that’s what he is on the surface. The narrator makes a point of telling us late in the novel about one of Jacob’s friends, Kowalsky, who:

He went [to Jacob’s shop to talk to him] because afterward the world looked just a bit rosier, because Jacob could say something like “Chin up” or “Things are going to be all right,” with just a bit more conviction than other people. (290*)

Jacob, unlike anyone else in the ghetto, can keep hope alive in these desperate circumstances. For some reason, people believe this man, instead of dismissing his news as lies or his comforting words as platitudes. At one point, another of Jacob’s friends warns him to get rid of his radio (no one else is in on the lie) because it will put everyone in danger if the Germans get wind of it. Jacob replies:

Isn’t it enough for you that we have almost nothing to eat, that in winter one in five of us freezes to death, that every day half a street gets taken away in transports? All that still isn’t enough? And when I try to make use of the very last possibility that keeps them from just lying down and dying — with words, do you understand? I try to do that with words! Because that’s all I have! — then you come and tell me it’s prohibited!…Since the news has been passed around in the ghetto, I haven’t heard of a single suicide. Have you? (222-223)

Jews entering in the Łódź ghetto

At times, Becker’s narrator shifts from “I” to a loose “We,” speaking for the whole ghetto or speaking in the voices of members of the ghetto. At times, the narrator speaks as Jacob himself, pondering about the latke-seller’s motives. The “You” changes from an address to the reader to various characters in the book to unidentified targets. The narrator is very aware that the story is constructed. In fact, the narrator gives us a choice of an alternate, happy ending rather than the actual dark ending of the inhabitants of the Łódź ghetto.

The narrator’s awareness of the story as a construction allows the narrator to play with the forms of the novel and story, especially by creating confusion about who is speaking or what actually happened. Some readers will hate this, especially the ambiguity-averse. But I think the deliberate blurring of voices makes this novel more powerful than it might have been if it had just focused on Jacob. By giving voice to more characters, the narrator (and Becker) remind us that the Holocaust silenced so many. Their voices should be a cacophony. For the most part, Holocaust literature elevates a few individuals above the rest to humanize the history. We can’t imagine the loss of millions, but we can wrap our brains around the loss of individuals. Jacob the Liar, however, reminds us that there should be millions more voices in the world where there is only a gaping, deafening silence.

* Quotes are from the 2012 edition by Arcade Publishing, translated by Leila Vennewitz, and made available as an ebook on Scribd.