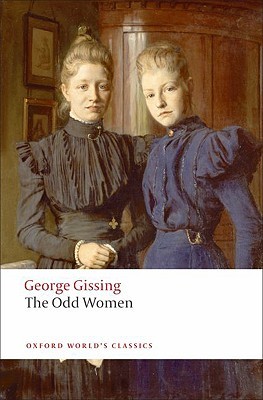 The Odd WomenIt’s strange that an obscure book from 1893 should have so many things in common with 2015. George Gissing’s novel, The Odd Women, is the story of two women who are caught in the war between the sexes. Monica Madden, terrified of living in poverty, married the wrong man. Rhoda Nunn is an early feminist whose pride keeps her on the front lines of the gender wars.

The Odd Women opens on the Madden family, in the happy days before the pater familias dies in a riding accident. Gissing jumps ahead fifteen years to show us what happened to the six Madden daughters in the meantime. Three of them have died. The two eldest work as governesses. The youngest is a shopgirl in London. Rhoda Nunn, an old family friend, reintroduces herself and tells the older Madden’s about her patroness’s work teaching girls typewriting and clerking skills. The rest of the novel primarily details Monica and Rhoda’s misadventures in love—a more complete summary of the plot is available on Wikipedia.

What astonished me most about The Odd Women were passages that could have been written today. With one exception, the men in this novel are firm believers in their traditional roles as breadwinners and kings in their castles. Monica’s husband, Edmund Widdowson, constantly remarks on this theme. His opinion is best summarized when he tells Monica, “I am no tyrant, but I shall rule you for your own good” (348*). Their relationship began by chance. They met one day in a park and struck up a conversation. Widdowson is immediately smitten. Monica is not sure about him and worried about how it will look if she meets with a man she hasn’t formally been introduced to and without a chaperone. Widdowson begins to send her overwrought letters, declaring his love for Monica. He essentially browbeats her into listening to his proposals. Monica’s fear of being poor, of being an “odd woman”—a woman who never got married—do the rest. They have a happy enough honeymoon, but things go almost immediately wrong between them. Monica wants to have friends; Widdowson wants to schedule her day and keep her to himself. Over a year, they destroy each other’s health and almost each other’s sanity.

In contrast, Gissing shows us the relationship between Rhoda Nunn and Everard Barfoot. Everard is the cousin of Nunn’s patroness. At first, Everard plans to tease Rhoda and woo her to see if he can get her to renounce her principles. But, funnily enough, they actually do start to fall in love with each other. While we watch Monica and Widdowson quarrel and grow miserable, Everard and Rhoda talk about what marriage does to people and how it sets up an unequal system. Rhoda wants women to be able to take care of themselves, financially, so that there are no more pitied “odd women” and literal poor, starving spinsters. She wants women to realize that they don’t need men to make their way in the world. Marriage should not be a Hobson’s choice; it should be a real choice. Everard is more interested in free love, but he’s a willing audience for Rhoda’s ideals. Still, they cannot find a way to live with each other. There’s too much mistrust, too much game playing, and too much pride.

There was one scene that stood out to me above all of the speech that reads scarily like modern Men’s Rights Activist propaganda. Rhoda’s patroness, Mary Barfoot, gives a speech to her pupils in which she reads out a letter she received from a detractor. The letter is introduced and read:

The taste of this epistle was as bad as its grammar…[Mary says,] “They will tell you that, in entering the commercial world, you not only unsex yourselves, but do a grievous wrong to the numberless men struggling hard for bare sustenance. You reduce salaries, you press into an already crowded field, you injure even your own sex by making it impossible for men to marry…Why don’t I encourage girls to become governesses, hospital nurses, and so on?…I don’t care to make use of the argument, which at once involves us in a debate with the out-crowded clerk [the author of the letter]. No; to put the truth in a few words, I am not chiefly anxious that you should earn money, but that women in general shall become rational and responsible human beings. (210-211)

Barfoot then goes on to tear down the prevailing ideal woman—docile, content to be ruled by men, not too intelligent, etc. She says nothing that might sound out of place coming from Betty Friedan, Gloria Steinem, or prominent feminists today.

The lesson I take from Gissing—now that I know he wasn’t being satirical—is that the problem with feminism and “meninism” is that it puts both genders into unattainable roles. If a man is pushed to be the pater familias, he can become lost and angry when women don’t “behave” or despising women as “born to perpetual pupilage” (308). Widdowson reflects at one point:

The bitterness of his situation lay in the fact that he had wedded a woman who irresistibly proved to him her claims as a human being. Reason and tradition contended in him, to his ceaseless torment. (308)

When women are pushed to be wives and mothers only, we resent the people who told us we couldn’t be anything else and that there’s something wrong with us for wanting to find our own fulfillment. We should, as Widdowson learns much too late, to treat each other as human beings—without the trappings of what the genders are expected to be.

The Odd Women is a didactic novel, but it’s actually enjoyable to read. There’s a solid plot. Some of the characters are less than three-dimensional, but Rhoda and Monica and Everard and Widdowson are fully realized. I highly recommend this novel. I think it will astonish people, even after 122 years.

* Quotes are from the Project Gutenberg edition, via Scribd. Page numbers are approximate.