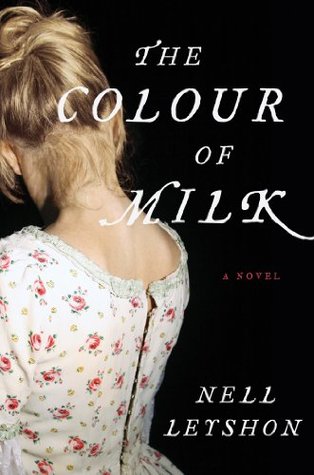 The Colour of Milk

The ability to write is so ubiquitous to people in the developed world that it’s easy to forget how powerful a thing it really is. Once we know how to write, then we can share our stories with people we will never meet. When we can write, we can leave a mark on the world that speaks for us when we’re gone. Through Nell Leyshon’s heartbreaking novella The Colour of Milk, protagonist Mary repeatedly comments that she is writing her own story, with her own hand. Unlike her sisters, her parents, and her grandfather, Mary has the power to explain her actions in plain black and white.

Mary is the youngest of four daughters. Her bad leg—a birth defect—means that she has to work twice as hard on the family farm as her siblings to keep up. (How to Be a Victorian, by Ruth Goodman, helped me understand just how hard it was to work on the farm, and how hungry and tired everyone must have been.) She also has a tendency to speak her mind, whether its politic or not, which gets her in trouble. It’s a relief to her abusive father to hire her out to the local vicar to help him care for his invalid wife. Work is work, as far as Mary is concerned. But she’d much rathe be home on the farm, where she understands the rules—and where she can stay far away from the vicar’s lecherous, careless son.

The simple language, lack of punctuation, and dialect Mary uses to tell her story immediately put me in mind of Jane Harris’ The Observations, though Mary doesn’t have near the agency that Bessy had. Mary also didn’t have the knowledge of sex that Bessy had. Mary also doesn’t have quite the cunning (if that’s what it was) that Grace Marks of Margaret Atwood’s Alias Grace had. In light of these other allegedly criminal maidservants, it’s hard not to read Mary as a trapped animal. Though she can read and write, she has no knowledge of the wider world.

Mary’s story builds with dread as the vicar’s wife succumbs to depression. There’s a sense of urgency when Mary tells us how important it is for her to get her story down quickly, as if she’s writing against a deadline. The violation comes from an unexpected quarter. Though Mary is otherwise so capable, she can’t defend herself against a well respected man in England in 1830.

After all, who would believe Mary’s version of events? She’s just a simple farm girl. The record Mary leaves behind allows her to tell the full truth at last. Even if no one in Mary’s world reads her story, we readers will. The Colour of Milk, though short, is an incredibly powerful read. Small wonder it won 2013’s Jerwood Fiction Uncovered Prize.