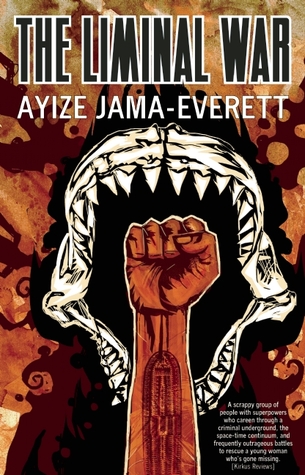 Ayize Jama-Everett created a dangerous alternate world of super-powered humans in The Liminal People. We rejoin the protagonist of The Liminal People, Taggert, some time later. Life has improved for Taggert since he broke free of Nordeen, his twisted mentor and employer. The Liminal War begins with a bang. Taggert is healing a woman of terminal cancer when Nordeen makes his move and kidnaps a girl Taggert has adopted as his ward. The truce is over.

Taggert has learned to accept the help of his daughter, Tamara, and his ward, Prentis, but accepting other allies is hard for him. He hasn’t been able to trust anyone his entire life. Of course, he’s being asked to trust an otherworldly sentient being that possesses its followers like a fungus—literally.

The first half of The Liminal War is a test for Taggert and Tamara as they learn more about Mico and the Manna. All they want is to get Prentis back. Unfortunately for them, the first time they go into battle against Nordeen and his otherworldly allies, they get their asses kicked. And when they learn that Prentis has been taken out of time, they have no choice but to accept Mico’s help.

As Taggert and Tamara search for Prentis, they learn that Taggert and Nordeen’s squabbles are just a small theater in the war between the forces of entropy and the Manna. Not that this changes things for Taggert and his clan. He fights for Prentis because he knows what Nordeen does to the Liminal; he twists their gifts into weapons.

The second half of the book, when Mico, Taggert, and Tamara travel first to 1971 London and 1938 Mississippi, the pace ratchets up even more. (It’s probably a good thing this book is only 224 pages. If it had been longer, the plot would have kept me up way past my bedtime.) When I started reading The Liminal War, I had no clue that the book would be a magical journey into music. In the past, the trio meet (and jam with) Bob Marley (in London) and Robert Johnson (in Mississippi). The plot weaves itself into Black music and Black history in powerfully moving ways. This book is brilliant.

The Liminal War did something I thought was impossible. It was even better than its predecessor, which knocked my socks off when I read it last year. Science fiction and fantasy fans, run—don’t walk—to go read Ayize Jama-Everett’s Liminal series.

I received a free copy of this book from Edelweiss, in exchange for an honest review. It will be released 9 June 2015.

4 thoughts on “The Liminal War, by Ayize Jama-Everett”