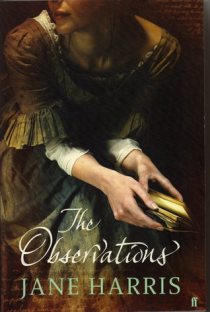 Bessy begins her tale on the road to Castle Haivers*. She has left Glasgow because her old employer has died, but she relates this in a way that makes it clear she doesn’t want to be found and returned there. At the end of the road, Bessy meets Arabella Reid. In spite of Bessy’s shaky story about being a housekeeper at the age of 15, Mrs. Reid offers her a position at the manor. There are hints that something strange is going on at Castle Haivers. Bessy is just the latest in a long line of maids. The people in nearby Snatter** village are rabid for gossip about the manor and its people.

There absolutely is something strange going on. In addition to her duties as a maid, Mrs. Reid has Bessy perform pointless, repetitive tasks until Bessy stops obeying. Bessy is required to keep a journal documenting her daily routine and feelings. Mrs. Reid runs hot and cold on Bessy, though Bessy grows attached to her mistress anyway. The first turning point comes when Bessy discovers that her mistress has been writing a book about improving the obedience and loyalty of maids, called The Observations.

The discovery infuriates Bessy and she decides to take revenge on her mistress. There have been hints that the death of the last maid but one was not an accident and Bessy uses the information to make Mrs. Reid think she’s being haunted. The plan works so well that Bessy starts to wonder if she has actually driven the woman mad.

As Bessy tells us her tale, she makes reference to her old diaries and Mrs. Reid’s Observations, though she tells us she can only do so if we (the readers) keep it secret. Lives could still be ruined by the story Bessy is relating. Bessy also tells us about her life before Castle Haivers. Each time, more detail is revealed and Bessy’s curious motivations become more intelligible. She is just as troubled, psychologically speaking, as her mistress. We’re not sure who Bessy is writing for this time, at least not until she gives up her final revelations near the end of the novel. Bessy is also showing us how talented she is at lying, which colored the rest of the narrative for me. If she was lying then, how much is she lying to me now?

The Observations—the novel, not the book within the book—begins with a girl running away from a terrible, terrible situation in Glasgow. Then it is a revenge story. Then it’s a ghost story and mystery. There are so many wonderful layers to peel away that 500 pages seems like barely enough room for them.

* I wonder if the name of the manor is a play on the Scots word “havers,” meaning to babble or to behave in an indecisive manner (via OxfordDictionaries.com).
** Also a dialect term, this time a Northern Irish word for snot, according to UrbanDictionary.com.