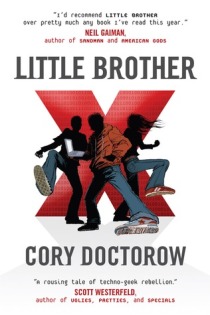 I picked this book up because of my sister. She told me that the book freaked her out so much that she couldn’t finish it. This is a pretty good indicator that I’ve got a lead on a good techno-thriller. I’m really glad I didn’t pick up Cory Doctorow’s Little Brother until Sunday evening after all my errands and chores were done, because I didn’t do anything else for the rest of the day except read the book as fast as I could. I just had to know what was going to happen next. Then today, after work, I checked out the sequel from the library.

So, to the review!

Little Brother was published in 2008 and its politics might seem a little dated. Well, they would have seemed dated if it weren’t for the recent revelations that the National Security Agency has been collecting the personal communications of thousands (if not more) of American citizens without any kind of legal oversight. This book taps into one of the central dilemmas of our time: the balance between privacy and security. On the one hand, law enforcement need to be able to gather data in order to catch criminals and terrorists before they can act. On the other hand, American citizens have the right to privacy. Law enforcement need to have probable cause before tapping your communications and searching your possessions. In the wake of September 11, the PATRIOT Act weighted the balance of the dilemma towards law enforcement.

In Little Brother’s world, there was a second terrorist attack on San Francisco’s Bay Bridge and cross bay tunnel, killing thousands. Marcus Yallow and his friends are picked up by the Department of Homeland Security on the day the bomb went off while they were in the process of gaming. They’re minors, but they still spend days in prison before being released. Marcus has been taught his rights, and tries to insist on having a lawyer, but he eventually breaks in the face of threats from his DHS interrogator. After he is released, in spite of his fear of the DHS, Marcus goes on a technological quest to regain his privacy and the privacy of all the other people who live in San Francisco.

Much of the middle of the book is a tense cat and mouse game between Marcus and the Department of Homeland Security. The DHS is granted wide powers of surveillance, to the point where they’re gathering so much data that their security net catches hundreds of people who weren’t doing anything more than breaking their usual pattern of the day. Marcus has a knack for finding the holes and flaws in that security net. As time goes on, events escalate into a low level war between young adults and teenagers on one side, and older adults, the media, and law enforcement on the other. Paranoia runs rampant. The situation eventually hits a breaking point. Doctorow sets things up so that the victor in this little war could be either side–hence the reading for five or so hours straight. I couldn’t see how Marcus could possibly win. I’m not going to give away the ending, of course.

I had a great time with this book. It’s got so many of the things I love in thrillers: thorny ethics, impossible schemes, cutting edge Internet tech, teenage Makers, and incredibly well drawn characters. It’s a pity I didn’t pick this book up sooner. I should point out that it is, at times, fairly didactic in making points about privacy and civil liberties. Several characters make speeches that sound more like formal arguments rather than natural speech. But there are more good points to Little Brother than bad (or irritating) ones. If nothing else, the crisis at the heart of this book deserves a wide audience because America still hasn’t struck a satisfactory, fair balance between privacy and security.