I surprised myself by reading another young adult novel this week. Normally, I shun them as unsophisticated and message laden. But Leviathan, by Scott Westerfeld, is dark enough and imaginative enough that I enjoyed it quite a lot. 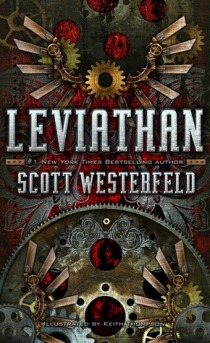 This alternate history is set in 1914, as Europe gears up for what in our history would be called the Great War. Germany and Austro-Hungary are literally gearing up for war against Serbia, France, Russia, and Great Britain. What makes this historical timeline different from ours is a very early discovery of DNA and the ability to manipulate it. In addition to the alliances, Europe is also divided into two technological camps: the Clankers and the Darwinists. Germany and Austro-Hungary are Clankers, who build war machines from engines and gears. The rest are Darwinist, who build their own war machines out of genetically fabricated animals. It sounds a little unbelievable when you put it baldly like that. (Come to think of it, the plots of a lot of the books I read are like that.) But in this world it works. And normally, I pass on books with illustrations. I like to imagine the characters for myself, thank you very much. But here, they’re a great addition, especially when they show the fantastical beasts the Brits have created.

The story follows to adolescents, one Austrian and one Briton. The Austrian is the orphaned son of the Archduke Ferdinand, Aleksander. The Brit is Deryn Sharp, a girl in disguise who joins the Air Corps at the beginning of the book. Their paths collide rather spectacularly near the end of the book. Before they do meet up, we get a lot of simultaneous background information and action sequences. It’s very deftly done and no expository characters in sight.

As I said before, one of the things I appreciated about the book was its darkness. Even though the characters are about 15, they’re in mortal danger for big chunks of the book. Deryn’s airship gets blown out of the sky by German zeppelins. Aleksander gets in a fight to the death with a German soldier. Westerfeld doesn’t soften anything just because the characters are young teenagers. Because of the high tension level, it was easy to get caught up in the book and to genuinely worry about the characters.

This book claims to be the first in a series, but I haven’t seen any news about a second book–not even on the author’s website. But if a second book is published, I will gladly spend another couple of evenings in Deryn and Aleksander’s company.